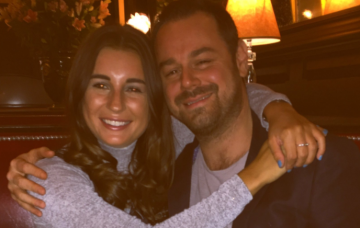 EastEnders actor Danny Dyer has not found it easy watching his daughter Dani on Love Island, his wife has revealed.

Dani’s mum, Jo Mas, said they have both been tuning in every night to see how their 22-year-old is doing.

She said Danny, who plays pub landlord Mick Carter on Albert Square, was upset when he saw Dani wrestle with her feelings over Jack Fincham.

The former Survival Of The Fittest star cried when she heard Jack, 26, had cheated on all his previous girlfriends, fearing she had coupled up with a man who would treat her badly.

She was then hurt when Jack said in a game of Truth Or Dare that he’d consider re-coupling with Hayley.

Speaking of how Danny, 40, reacted to his daughter’s tears, Jo told the Sunday People: “He obviously got a bit choked up when she was sad about finding out that Jack was a *expletive*. That’s his daughter and they have a very close bond.

“He wishes that Dani could be a bit like me when it comes to emotions, as he thinks I’m hard work and I don’t give anything away.”

She said they were both a little concerned about Dani going in the villa as she is “sensitive” and has been “hurt by boys” before.

Meanwhile, Danny has joked about his daughter’s appearance on the show on Instagram.

“Me and the Wife have come to accept the fact that we was put on the planet to reproduce Love Islanders,” he wrote.

He wrote the message alongside a picture of their other daughter, Sunnie, 11, joking she’ll be on the show in the future.

It seems Danny and Jo, who also have a son, Arty, five, don’t currently have to worry about Dani getting her heart broken as she and Jack are now getting on like a house on fire.

Viewers saw them share their first kiss in Friday evening’s show after Dani agreed to give their relationship another chance, to Jack’s delight.

She was later delighted when Jack picked her at the re-coupling, gushing about his feelings for her.

He said: “I want to couple up with this girl as she has an absolutely amazing personality, I clicked with her straight away and I really enjoy spending time with her. I like that she’s really kind and puts people before herself.

“I think she’s beautiful inside and out and I have fancied her more every day. I thought I had lost her at one point but we are back on track, so the girl I want to couple up with is Dani.”

When she joined him on the sofa, he asked if his speech was ok as he was “so nervous” and had “plenty more to say but I lost it”.

Their odds of winning the show have now been slashed by the bookies.

But they better not get too close, as Jo has said she’ll “go ballistic” if Dani has sex on the show!

Do you think Dani and Jack will last as a couple? Leave us a comment on our Facebook page @EntertainmentDailyFix and let us know what you think!