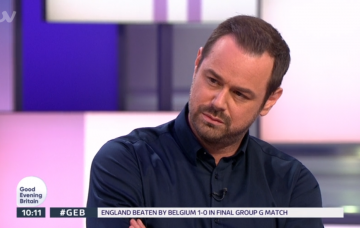 He had viewers in fits of laughter

EastEnders actor Danny Dyer had the nation in hysterics during his appearance on Good Evening Britain on Thursday night.

Piers Morgan and Susanna Reid hosted a one-off special of their breakfast show straight after England’s game against Belgium in the World Cup.

But Danny, 40, caused utter chaos on the show as he swore twice on air as well as shutting down Piers, 53, for his comments about Love Island.

During a segment about Brexit – which was discussed on Love Island by clueless Hayley –  with Jeremy Corbyn, Danny had some strong words for former Prime Minister David Cameron.

He ranted: “This whole Brexit thing, when you’re judging everyone on Brexit if they don’t know nothing about it.

“Who knows about Brexit? No one’s got a clue what Brexit is.

“It’s like this mad riddle. So what’s happened to that [expletive] David Cameron who called it on.”

Danny added: “How come he can scuttle off? He called all this on, where is he? In Europe, in Nice, with his trotters up, where is the geezer?”

Susanna was clearly left red-faced by the outburst as she pulled a face to the camera.

Meanwhile on the show, Danny shut down Piers after he attempted to apologise for his comments about Love Island – the show that Danny’s daughter Dani stars on.

Piers has been openly critical of the ITV2 reality show, even calling the contestants “halfwits”.

As he came face-to-face with the hardman actor, Piers tried to clear the air.

He told Danny: “Before we go any further, you may have been led to believe from social media that I’ve spent the last three weeks calling every contestant on Love Island a ‘bunch of brain dead zombies’.

“I’d like to clarify that obviously doesn’t include anyone in the villa who is called Dani Dyer, which I believe is your daughter.”

He continued: “There’s been a terrible misunderstanding. She is a shining oasis of intelligence and beauty and grace.”

Piers admitted: “I’m sorry. I’m sorry about any misunderstanding that may have arisen.”

Danny replied: “Just calm down, stop getting so emotional.”

Danny’s daughter is currently a favourite on the hit show and is coupled up with pen salesman Jack Fincham.

The star, who plays Mick Carter in the BBC soap, admitted he didn’t want his daughter to go on the show.

He told Piers and Susanna: “I didn’t want her to do it. You fear as a father but it’s entertainment.

“It’s a game show and there’s 50 grand at stake which is a lot of dough and Dani’s going to win it.”

Do you watch Love Island? Leave us a comment on our Facebook page @EntertainmentDailyFix and let us know!