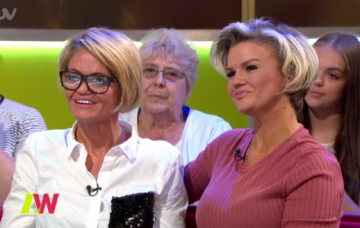 Things have turned rather sour

Kerry Katona and Danniella Westbrook have supported each other through their addictions in the past, but they are now at war and Danniella has hit out at Kerry.

Danniella, who is currently in rehab to beat her drug addiction, gave her opinion about Kerry’s boozing on Celebs Go Dating last night (25 February).

It comes after she reportedly called Kerry from rehab to end their friendship, after Kerry spoke about the star’s addictions on Loose Women last week.

Former EastEnders star Danniella tweeted: “She only has loyalty to what makes her money and pays for what she needs.. she bangs on about being in recovery & gets tipsy on @CelebsGoDating last night.. clearly relapsed from her 12 step program #HopeSheFindsHerWay.” (sic)

She only has loyalty to what makes her money and pays for what she needs.. she bangs on about being in recovery & gets tipsy on @CelebsGoDating last night.. clearly relapsed from her 12 step program #HopeSheFindsHerWay pic.twitter.com/N4sqmtsgy1

It comes after Danniella, 45, reportedly told Kerry, 38, they were no longer friends after she spoke out about the former EastEnders star’s rehabilitation and hinted that she wasn’t ready to help herself.

Being in recovery means abstinence from all mind altering substances including alcohol,.: if you drink it’s a relapse.. the 12 steps work.. working your own program doesn’t as I well know hence being back in rehab #12steps pic.twitter.com/Fxn4q9ynOP

Mum-of-five Kerry is apparently shocked by the actress’ reaction.

A source told The Sun: “Kerry was horrified when Danniella called her from rehab and started having a go at her.

“She was furious that Kerry had spoken about her on Loose Women and says she shouldn’t have said anything.

“Kerry was so upset as she’s always been very, very supportive of Danniella and has only ever said nice things about her.”

Danniella made her feelings about her former pal clear when she also tweeted: “Kerry Katona shocked as Danniella Westbrook calls her from rehab to end their friendship after talks about her on Loose Women…

“Your no inspiration 2 me thanks 4 money out of me whilst I’m getting well. Maybe next time stop ya jaw swinging on @loosewomen.” (sic) 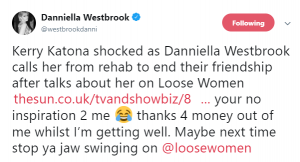 Their drama began after Kerry, who has also battled drug addiction in the past, said on Loose Women last week: “You can’t help someone who’s not ready to get help.

“I was in that situation. Until I was ready to help myself, nobody could help me.

“I’ll always be there for Danniella, she sent me a message last week. It’s not my story to tell.”

Danniella is currently undergoing a 12-week program to get clean after she spoke out about her demons on The Jeremy Kyle Show earlier this month.

Kerry also defended her behaviour on Celebs Go Dating last night, where she appeared tipsy, burped and picked her teeth during her date.

She insisted she is “gone” after just two drinks and was trying to put her date, Miguel, off as she wasn’t keen.

Ent Daily has contacted reps for Danniella and Kerry for comment.