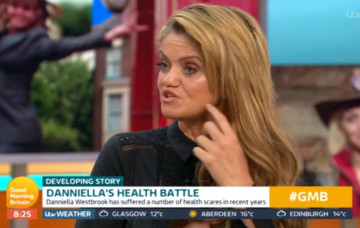 Danniella Westbrook to have rib implanted in cheek

She opened up about her battle with osteoporosis

Danniella Westbrook has revealed she’s undergoing another surgery on her face due to osteoporosis.

The former EastEnders star, 44, appeared on Good Morning Britain on Tuesday and opened up about her battle with the bone condition, and how it has left her with barely any bone in one of her cheeks.

Danniella revealed doctors will be taking a piece of her rib and implanting it into her cheek in an upcoming surgery.

Speaking to Piers Morgan and Susanna Reid, Danniella insisted the problem wasn’t caused by her infamous cocaine addiction, but actually brought about by “bad dental work.”

“Osteoporosis was led to by bad dental work,” she said.

When Susanna asked the star if her former drug use had anything to do with the problem, Danniella said: “Mine isn’t. When I was doing excessive amounts of drugs and lost my nose I would have got osteoporosis back then, not after being 13 years clean.

“I would have got it when I was a full-blown addict. I wouldn’t have just got it in the last three years.”

Danniella had a dental implant procedure a few years back, but claims the screws that were put into her jawbone became infected and started eating away at her jaw and cheekbones.

She said the procedure led to her getting septicaemia and then osteoporosis.

Discussing her dental work, she explained: “The screws on this side, the bone didn’t close around them after the implants which led to the blood getting into the bone through the gums.

“That gave me the septicaemia, which gave me the bone disease and started rotting away, and it’s all down to that.”

Danniella revealed she will now have surgery to correct the problem.

The star will have a piece of her rib implanted into her cheek to replace the bone, which has rotted away from the disease.

“They were going to have to take some of my skull but they’re going to use a floating rib,” she added.

Danniella also spoke about recent reports alleging she is homeless and bankrupt, vehemently denying both claims.

“I am together,” she said. “I’m actually very together, it’s the people around me that make stuff up. I have slander written about me all the time.

“Sometimes I just get up and say I can’t do this anymore. Not in a suicidal way but I just think this is really hard work. Most people don’t take this much rubbish in a year or a lifetime.”