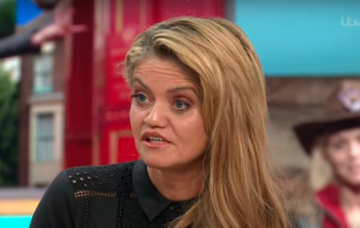 Danniella Westbrook has revealed she is battling womb cancer.

The former soap star has admitted she is terrified of dying from the same disease that killed pal and Big Brother contestant Jade Goody but vowed to fight her illness.

The 44-year-old also said she will undergo a hysterectomy in three weeks – and has turned to cocaine to deal with the shocking news.

The mum-of-two told the Sunday Mirror doctors originally though she may be pregnant after discovering a tangerine-sized clot in her womb.

And Danniella confessed it had crossed her mind that she might have preferred not to have known about her diagnosis.

But the troubled TV personality decided not to be “selfish” and try to beat her health worries for the sake of her kids.

“I’ve tried to commit suicide before but getting this diagnosis has made me realise I don’t want to die,” she said.

Danniella’s mum also suffered with womb cancer when the Sam Mitchell actress was just 15 – and she intends to be treated by the NHS because of how well her mum was looked after.

She also encouraged more women to have smear tests after admitting she had not had one for years.

Even though doctors are not sure if her cancer has grown until her op, Danniella remains optimistic about recovery.

She continued: “The doctors say they believe it is containable so I’m hopeful.”

Danniella’s symptoms began around 18 months ago when she was suffering from bad periods – which she initially thought indicated she was going through the menopause.

After doctors failed to identify why she was bleeding so much – to the point she was changing her outfit six times a day – Danniella later turned to friend Kerry Katona in despair following a collapse in the shower and was rushed to hospital.

But after she was finally informed by a medic in Spain what was happening to her body, Danniella turned to drugs and went on a two-day bender to numb the pain of the diagnosis.

“I shouldn’t have done it and it’s not right, there is no excuse to take Class A drugs. At the end of the day I realise I am an addict and I was despairing,” she said.

Realising her medical appointments must now take priority over drugs, Danniella is now determined to get better.

“I need to be strong and make my body fit and healthy. It’s the only way I will win,” she concluded.