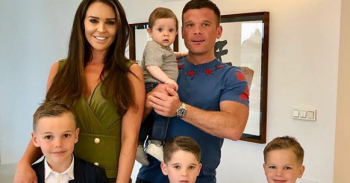 Danielle Lloyd has put her oldest son into therapy

Danielle Lloyd’s oldest son is having therapy to cope with anxiety.

The 35-year-old model – who has Archie, eight, Harry, seven, and five-year-old George with ex-husband Jamie O’Hara and 18-month-old Reggie with fiance Michael O’Neill – enlisted professional help for the youngster and has found it’s helped him to open up to her more and she thinks parents shouldn’t be afraid to seek assistance from outsiders when they are struggling with their children.

She told Closer magazine “Archie’s only eight but he’s a sensitive boy. “I’ve taken him to a therapist and it’s helped him open up to me.

“Now if he has any worries, he’ll tell me.

“I want my kids to know it’s OK to talk about their feelings.

“And it’s a good lesson for us parents to learn that we can ask for help if our kids are struggling too.”

Danielle has been open about her own battle with anxiety and has learned to combat her feelings with exercise and refusing to shut herself away.

She said: “People say, ‘You’re on the telly – how can you have anxiety?’ They haven’t got a clue.

“We all have the same worries. It’s hard to know what the trigger is, but I’m a shy person and life can be hectic.

“Earlier, I had so much anxiety, my heart was beating out of my chest at what felt like a million times an hour.

“I was breathing heavily and felt sick.

“I’ve learned it’s better to leave the house, see people, and talk about it, as that’s therapy in itself. “I’ve also started doing breathing exercises at home too.”

The brunette beauty – who underwent emergency surgery in 2012 after her breast implants burst – admitted her previous cosmetic surgery was done because she felt so “rubbish” about herself so she should have sought to tackle the underlying issues instead.

She said: “I had surgery before because I felt rubbish about myself.

“I’d been in abusive relationships and felt [bleep].

“I didn’t need a boob job – I needed a therapist!”

Has seeing a therapist helped you or one of your family? Leave us a comment on our Facebook page @EntertainmentDailyFix and let us know.