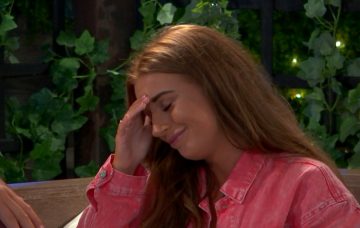 This is going to disappoint Jack...

Love Island’s Dani Dyer has dealt a blow to partner Jack Fincham by admitting she doesn’t feel “butterflies” around him.

The pair have been coupled up since the first episode but their pairing hit the rocks on Tuesday night when it emerged Jack had cheated on his two previous girlfriends.

Dani is finding it hard to move on from that revelation which doesn’t bode well for their future.

ED! can reveal that in Wednesday night’s episode, a nervous Jack worries that he’s blown his chance with Danny Dyer’s daughter.

He asks her: “You don’t think any less of me do you? Be honest though because I hated that. It’s not a good look, is it?”

Dani replies: “No, obviously. Initially I just thought ‘have I just gone for the same type that I always go for?’ It just threw me off a little bit.”

However, she then concedes that while she likes Jack “as a person” she is nervous about their future if he’s been unfaithful in the past, and worries her friends would be advising her against him.

“I like you as a person, we’ve been getting on and stuff. It’s not a problem. I don’t think I have a problem with you about it because nothing’s going on yet,” she says.

“It just threw me off a little bit. Obviously it’s just a little bit…It makes me think ‘I’ve gone for the same geezer that all my mates say ‘Dan don’t!’ You’ve got to understand that.”

Jack, however, decides he’s going to remain optimistic about Dani.

He tells the Beach Hut: “If me and Dani did give it a little bit of a chance, I think it would be worth it. I’m going to just carry on how we are and I think me and Dani will be sweet, I think we’ll be alright.”

Unfortunately for Jack, it seems Dani is heading in the opposite direction.

She tells the girls she can’t judge Jack by his past but, realistically, on the outside world her friends would be advising her to steer clear given his cheating past.

Dani concludes: “I’ve got to talk to Jack later. I just don’t get butterflies around him. He’s a lovely looking lad and he’s very funny, and any other girl would be lucky to have that. But not me because, I’ve had that.

“I do feel ready to find something new and that’s what it is. New and fresh, not used.”

There is a new recoupling at the end of the week and, with two new girls arriving in the villa on Wednesday night, it means someone will be left without a partner and dumped from the island…