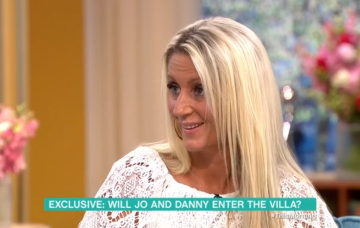 Is he making a cameo on the show?

Love Island fans are patiently waiting to see if EastEnders actor Danny Dyer will enter the villa to support his daughter Dani Dyer, if she makes it until the end.

Earlier this week, The Sun claimed Danny has prior work commitments which could prevent him visiting the Majorca villa, as part of the ‘meet the parents’ episode towards the final of the reality show.

However, during an appearance on This Morning on Thursday, Dani’s mum Joanne Mas has said Danny WOULD make a cameo on the programme if asked.

Jo replied: “Yeah. He would do a cameo on that show – he’d love that.”

Holly Willoughby quipped: “That is an episode I just want to fast-forward to and just watch it now!”

It was recently reported that Danny, 40, wouldn’t be able to visit the villa due to work commitments.

But ITV2 told ED!: “There are no current plans for any of the families to appear on the show.”

Both Danny and Jo have been rooting for their daughter on the programme.

Speaking about Dani’s relationship with pen salesman Jack Fincham, Jo said: “I do think she made the right connection.

“The first time I saw him [Jack] on the telly, I was thinking he really is Dani’s type he’s so funny and so warm.

“And then there was a little bit of a wobble and I was thinking don’t worry about it… You could see her panicking but Dani panics anyway.”

She said: “Danny really likes Jack but I think Danny, when he does meet Jack, big Danny, I think he will probably cry, ‘You’ve took my child away from me’. He’s really possessive.”

Jo went on to reveal that she and Dani actually kept her Love Island stint secret from Danny.

Speaking about Dani’s decision to go on the show, Jo said: “We both discussed it. She had all her meetings and she was really worried. She said, ‘Daddy’s not going to approve of it.’

“I said don’t worry about Dad. He’s not going to know. The football will be on, nobody watches Love Island, you will probably get kicked out in a week, have a great time.

“Just tell him you are going on holiday – that’s it.”

Jo explained news of Dani going on the show leaked to the press and Danny rang her and asked about the reports.

Jo continued: “I was like, ‘Oh I’m a bit busy at the moment.’ Then he come home I done him a nice little dinner and me and Dani were both looking at each other like… [I said] ‘Yeah she’s going in, she needs a break, I need a rest.”