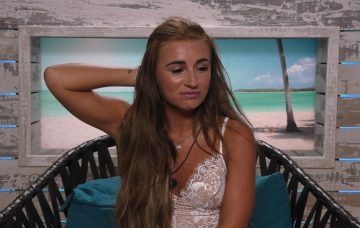 Some viewers couldn't believe what they were seeing!

The 21-year-old daughter of EastEnders actor Danny Dyer was seen directing a hairdryer towards her eyelashes as she got ready for a day of sunbathing around the pool.

Even Love Island’s narrator Iain Stirling seemed baffled, referring to it as “whatever Dani is doing.”

He then added: “The one thing I want to know is why spend the morning blow-drying your lashes if you’re just going to stick on a massive pair of sunglasses.”

Meanwhile, fellow islander Laura told Dani: “I feel like watching you dry your eyelashes is the highlight of my day.”

The moment certainly confused Love Island fans, who took to Twitter in droves to admit they had no idea blow-drying eyelashes was a ‘thing’.

One said: “They say you learn something new everyday but blow drying eyelashes!!”

Another added: “Watching Dani not only dry her lashes but use a hairdryer to do it too really makes me question my whole routine.”

They say you learn something new everyday but blow drying eyelashes!! #loveisland

#loveisland Dani D blow drying her eyelashes? Seriously, WTF? Who does that?

Anyway can someone explain blow drying your eyelashes #LoveIsland

@LoveIsland Drying your eyelashes??? Is that seriously a thing??? #loveisland

Does everyone else dry their eyelashes? Is this a thing? Am I the weird one for not doing? #loveisland

Others, however, didn’t see what the fuss about, saying it’s perfectly normal to blow-dry false eyelashes and give them a little bit of extra TLC.

One viewer pointed out: “Don’t know why people are so shocked at Dani drying her eyelashes… you literally have to brush and dry them when you wear permanent fake lashes.”

Either way, viewers seemed pretty agreed on the fact Dani’s eyelash blow-drying was the moment of the series so far!

One wrote: “Dani drying her eyelashes. That’s it, the show has reached its’s pinacle. There’s no topping that.”

Meanwhile, Dani came to a decision about her coupling with Jack Fincham on last night’s episode.

She’s been doubting their future ever since it emerged during a challenge he’d cheated on two previous girlfriends, and broke the news to him on Wednesday that she didn’t see them becoming anything more than friends.

Jack told Dani he felt the same away, before privately admitting in the Beach Hut he was gutted.

But with two girls arriving at the villa yesterday – Rosie Williams and Georgia Steel – there’s a possibility Jack will end up with one of them at the first recoupling, leaving Dani the one in danger of dumping…

Is blow-drying your eyelashes weird or totally normal? Leave us a comment on our Facebook page @EntertainmentDailyFix and let us know what you think!