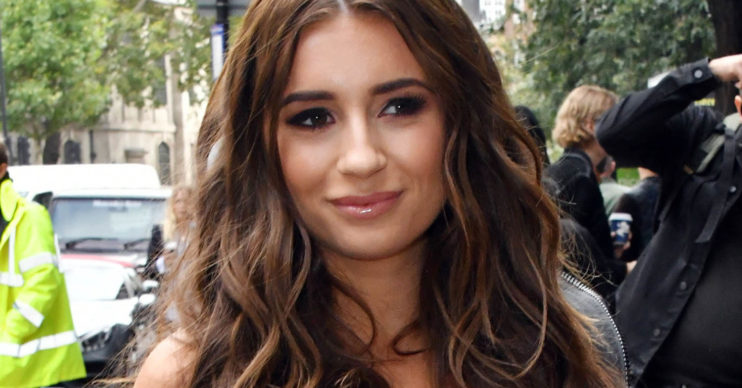 Dani Dyer has announced she’s pregnant with her first child.

The Love Island star is expecting her first baby with her partner Sammy Kimmence.

Dani shared the news to Instagram on Tuesday alongside a photo of herself and Sammy showing a scan photo.

What did Dani Dyer say?

She wrote: “Little bubba can’t believe you are going to be ours.

“Me and Sammy are so excited to start this next chapter in our lives, feel so lucky and grateful.. 2021.”

Many of her celebrity pals congratulated the couple on their happy news.

Georgia Steel added: “Awh baby I love you. Can’t wait for this next chapter.”

Meanwhile, Sammy also shared the news to his Instagram page.

Little bubba can’t believe you are going to be ours.

He wrote: “To say I’m grateful is an understatement.

“Can’t wait to start my perfect little family with you, baby Kimmence due 2021… time to hang my boots up from vine FC.”

Dani, whose dad is EastEnders actor Danny Dyer, found fame on the 2018 version of Love Island.

On the show, she found love with Jack Fincham and they went on to win the series.

However, she split from Jack last year and reunited with her ex Sammy.

Meanwhile, Dani and Sammy reportedly split after 10 months of dating in March.

At the time, reports claimed Dani was “sick of the drama and had enough of the fighting”.

However, a month later, they reunited and have been going strong since.

Speaking to OK! Magazine about the alleged split, Dani said: “We didn’t even really, it wasn’t even a thing. It just got made into a thing.

She added: “We really get on he’s so easy. It’s been pretty chilled.”

Congratulations to Dani and Sammy!