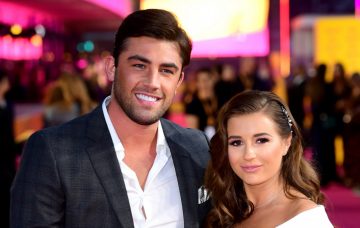 Love Island’s Dani Dyer has hit back at claims she has only rekindled her romance for Jack Fincham for “financial reasons” rather than love. Doubts had been cast over their motives to get back together after shocking fans by announcing their split at the beginning of the week. Critics are now claiming that with so […]

Love Island’s Dani Dyer has hit back at claims she has only rekindled her romance for Jack Fincham for “financial reasons” rather than love.

Doubts had been cast over their motives to get back together after shocking fans by announcing their split at the beginning of the week. Critics are now claiming that with so many joint projects on the go a split would only hurt the Love Island winner’s bank balances.

A source told The Sun: “Jack and Dani’s break-up caused massive headaches for producers. They’ve filmed a number of shows together and they are ruined if they don’t stay together.

They continued: They were also just weeks away from presenting the red carpet coverage at the National Television Awards together, an impossible gig for them if they’re not in a relationship.

“Their reconciliation has only been for commercial reasons, they aren’t genuinely in love.”

But Dani, 22, and Jack, 27, who have been dating for the past six months after meeting on the ITV2 reality show, blasted the claims on social media.

The former stationary salesman posted a sweet black and white photo of them, with the caption: “Yo little guy @danidyerxx”.

Dani quickly replied: “Love you baby”, before adding: “Oh wait wait maybe I shouldn’t say that because we are together for the money apparently??”

The Love Island winner had taken to Instagram Stories at the beginning of the weEk to reveal she had split from Jack. She wrote: “Jack and I have sadly decided to part ways. It’s been an incredible six months and we will always have a place in our hearts for each other, but we’ve sadly come to the realisation that it’s not meant to be long term. We both plan to stay friends. I hope you’ll all understand. Love Dani x.”

But just a day later Dani had backtracked on her announcement saying: “Just want to put all comments to bed. All I can say is I’m still 22 trying to get my [bleep] together and grow into a woman but doing it in the public eye is sometimes hard and scary but arguments are arguments and I love him.”

Meanwhile, Dani’s dad EastEnders actor Danny Dyer claimed the pair had never split up in the first place. Speaking on The Jonathan Ross Show, he said: “You know what women are like. I’m just saying she got a little bit irate, screaming and shouting. I don’t know what was going on, but now they’re sweet.”

Do you think it’s possible to find true love on Love Island? Leave us a comment on our Facebook page @EntertainmentDailyFix and let us know what you think!