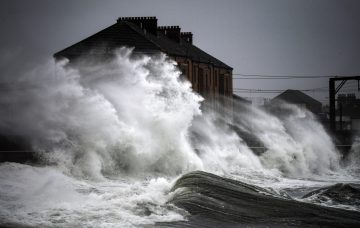 The Met Office has issued a “severe” yellow weather warning for Friday, warning the public to prepare for disruption as potentially life-threatening conditions hit.

The warning about storm Saint Etienne covers the north of England, large areas of Scotland, Northern Ireland and northern Wales between 3am and 11.59pm on Friday.

Read more: Britain to be hit by flooding, ice and heavy snowfall

It states: “A weather system will move eastwards across the UK on Friday bringing widespread gales.

“Inland gusts of 60-70 mph are possible with gusts of 80 mph in exposed locations in Scotland, Northern Ireland and northern England.

“There remains some uncertainty in the track of this system and where the strongest winds will occur.

“Heavy rainfall may be an additional hazard across parts of northern and western Scotland.”

Saint Etienne is expected to hit the Cornish coast tonight and tomorrow, before heading north and up to Scotland.

The Met Office continued: “A spell of very strong winds on Friday could bring some disruption.

“Road, rail, and ferry services may be affected, with longer journeys times and cancellations possible.

“Some roads and bridges may close and there is a slight chance of some damage to buildings, such as tiles blown from roofs.

“There is a small chance injuries and danger to life could occur from flying debris, as well as large waves and beach material being thrown onto sea fronts, coastal roads and properties.”

Temperatures are also set to plummet due to a low-pressure system; this is forecast to cover parts of the country in up to eight inches of snow.