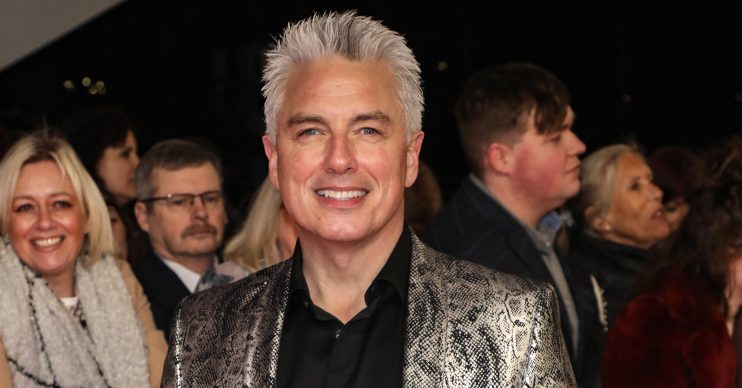 TV star John Barrowman is certainly no stranger to extravagance, so it came as no surprise when he re-posted a picture of himself in costume to celebrate his birthday.

The Dancing On Ice judge, who turned 53 earlier this week, re-posted a picture of himself on Instagram, wearing  white stilettos heels, teamed with a pair of blue shorts and American flag style top.

Smiling broadly for the camera, while posing on an electric scooter with one leg kicked in the air, fans of the musical theatre star posted a number of celebratory messages on turning 53.

One wrote: “Happy birthday to our shining star@johnbarrowman!!!!”

You sir are a national treasure.

Another wrote: “Happy birthday! You sir are a national treasure.”

Joining in on the birthday wishes, another wrote: “Cool high heels.”

To celebrate his birthday on Wednesday this week, John, spent the evening at the Noel Coward theatre to watch Dear Evan Hansen. Taking to his Instagram account he thanked the cast for “hanging around” to say hi to him.

But this is not the first time the Glaswegian born star has donned a fancy dress outfit to turn heads.

Back in 2017, for a scheduled photocall, the former Doctor Who star, wore a Wonder Woman outfit for Atlanta’s Dragon Con.

And while he’s one for having a bit of fun, his recent exploits left him red faced, on the set of celebrity Juice, when his one of his testicles was exposed in a wardrobe malfunction.

Comedian and presenter Keith Lemon had posted photos and videos of the Dancing On Ice star twerking in a pair of white pants against a giant red high-heeled shoe.

But in one of the pictures, John stands smiling for the camera, while his scrotum was on show, as his underpants had slipped to one side.

One follower, who spotted the wardrobe malfunction said: “Yeah, I’m sure I can also see a ball bag hanging out there.”

Another jokingly added: “Ummm johns bollock is hanging out mate.”

Read more: John Barrowman has not spoken to Caprice Bourret since DOI exit

Do you think John Barrowman is the right man for the job on Dancing On Ice? Leave us a comment on our Facebook page @entertainmentdailyfix