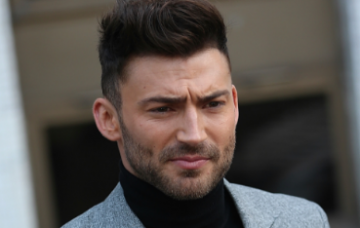 He will pay tribute to the men at his upcoming wedding

Reality TV star Jake Quickenden has recalled how he turned to alcohol to deal with his grief after losing his dad and brother.

Dancing on Ice contestant Jake, 29, was devastated after losing both his brother Oliver, 19, and his father Paul, 52, to bone cancer in the space of just four years.

Jake told The Mirror newspaper: “I was drinking on my own to numb myself to the feelings. I should have opened up a lot sooner.”

Read more: Idris Elba reportedly engaged after proposing to girlfriend at cinema screening of his own film

Jake, along with mum Lisa and other brother Adam, was with his younger brother when he passed away after a two-year battle with bone cancer.

His father Paul had died just four years earlier after his own battle with the disease.

Oliver had married his girlfriend Olivia before losing his battle with cancer, and Jake has said he thinks of her as his little sister.

He has previously touched on how he used alcohol as a coping mechanism, saying in a 2014 interview with Cosmopolitan magazine: “I went a bit of a downward spiral for about a year after my brother passed and got drunk with my mates a lot.”

In another interview with Loose Women last year, he said: “I was in a bit of a dark place. I lost my dad and my brother, both to bone cancer. It wasn’t even hereditary, just very unlucky they both got that.

“I struggled a lot with it, especially with my younger brother. I should be looking after him. He’s my little brother. I kind of went in a downward spiral.”

Jake said he wasn’t speaking out to get pity, it was to show others in the same situation there is a way out.

“After Oliver passed, I had a year where I did nothing. I laid on my mum’s sofa, wasn’t working, wasn’t making money, just going out and getting so drunk I couldn’t remember the night before. I’d lie in bed all day being depressed and down and didn’t want to burden my mum as she’d lost a son.”

“I dealt with it badly,” he said. “By drinking a lot. I went out most nights and drank myself stupid.

“It took me almost a year and then I kind of thought, ‘What am I doing? I’m not doing anything here’ and I wanted to make something of myself.”

Jake has since enjoyed continued success in his career, appearing on I’m A Celebrity and currently winning applause for his performances on ITV’s hit show Dancing On Ice.

He’s also found happiness in his personal life, and is engaged to Danielle Fogarty, the daughter of former motorbike champion Carl Fogarty.

He says he’s sure his brother and dad would have approved of his choice of wife.

“They would love Danielle.” he told The Mirror, “But I’m a firm believer they are with me every day.

“We have two massive pictures of my dad and brother, and they’ll be there at the wedding. And we will do special drinks that they liked.”

Jake and Danielle got engaged after he proposed on his 29th birthday in September. They’ve been together since meeting at the wrap party for 2014’s I’m A Celebrity series, in which Jake was a runner up.

Taking to social media after the romantic proposal Danielle wrote: “So fairytales do come true… my best friend and soulmate @jakequickenden14 asked me for his hand in marriage and of course I said YES!!

“It was the most perfect day a girl could wish for, I’m on cloud 9!! We can’t wait for our future together.”