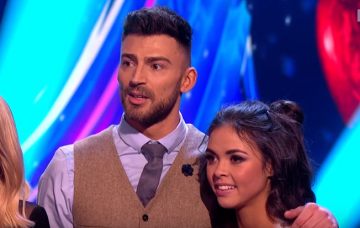 Their next routine could be in jeopardy!

Jake Quickenden has admitted his next Dancing On Ice performance is up in the air after partner Vanessa Bauer came down with the flu.

The former I’m A Celebrity and X Factor contestant took to Instagram Stories on Tuesday night to reveal he’s been banned from seeing poor Vanessa while she recovers.

Read more: Kerry Katona hints at a FOURTH marriage… to herself!

That means they haven’t been on the ice together ahead of Sunday’s skate – or even finished their routine.

A sombre Jake explained: “So, we’ve hit a roadblock at training because Vanessa has the flu and I can’t come into contact with her for 72 hours, so we haven’t got a routine. I don’t know what I’m going to do.”

Trying to stay positive, Jake even suggested HE choreograph the skate in Vanessa’s absence.

“Vanessa always comes up with great routines and now she’s poorly in bed with the flu. I don’t know… do you reckon I should try to choreograph one?”

While Vanessa’s illness means she and Jake are behind when it comes to their next routine, he’s insisted the most important thing is her health.

He tweeted yesterday: “Get better soon, Vanessa. Don’t worry about anything just get yourself well and then we can train.”

Vanessa replied: “Thank you for all the get well wishes. Been sick with a contagious GI virus and hope to be on my feet/skates asap to teach Jake the choreo and deliver a good show on Sunday ! The show must go on!”

Meanwhile, Jake has still been out on the ice while Vanessa is bed bound.

He gave pro skater Matt Evers a shout-out yesterday for helping him in training, saying: “Thanks for helping me today. I very much appreciated your help and guidance. You are a true legend – and very handsome!”

Matt was paired with Great British Bake Off winner Candice Brown in the current series, but they were the first couple eliminated.

Read more: Call The Midwife’s Helen George hits back after being called ‘massive’

Jake and Vanessa are among the bookies’ favourites to go straight to the final.

They’ve consistently impressed the judges and viewers with their polished routines each week and topped the leaderboard.

Dancing On Ice continues Sundays at 6pm on ITV.

Who do you want to win Dancing On Ice? Leave us a comment on our Facebook page @EntertainmentDailyFix and let us know!