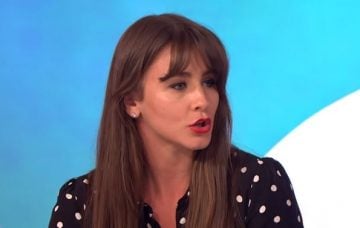 Not letting cruel remarks affect her

Brooke Vincent has revealed she turns to Coronation Street co-stars Helen Flanagan and Catherine Tyldesley when she’s having a bad day.

The actress, who plays Sophie Webster in the soap, told Closer magazine that after so many years in the public eye she’s learned how to ignore vile trolling.

But that doesn’t mean it can’t sting.

Recalling one hurtful jibe, Brooke – who is currently competing in Dancing On Ice – said: “I remember once I got papped on holiday and a troll wrote I had arms like a German shot-putter.

“I tried not to let it faze me and remember that worse things happen to people.

“Whenever I’ve had a bad day, I’ve got girls like Helen and Cath who’ve got my back, and everyone else on set – we’re just like a family.”

Brooke, 25, has been vocal about trolling in the past – and used her own experience to help prepare for last year’s Corrie storyline about Sally’s troll.

She told Good Morning Britain last year she was often targeted because of her skin, which she has no control over.

“I think people just like to have an opinion,” she said.

“Social media has given people the opportunity to sit at home in their own comfort zone and go ‘I don’t like that, I’m going to write that to you’.”

Brooke made her debut on Dancing On Ice last weekend, skating to Carly Rae Jepson’s ‘I Really Like You’, and safely securing her place in the next round.

But it wasn’t an entirely flawless performance after she suffered a slight wardrobe mishap mid-skate.

Poor Brooke ripped her nude fishnet stockings after getting caught on skate partner Matej Silecky’s buttons during the routine.

Brooke and Matej earned 3s from Jason Gardiner and Ashley Banjo, and 3.5s from Christopher Dean and Jayne Torvill, giving them a total of 13 points out of 40.

Read more: Two Dancing On Ice stars have been told to keep apart in next Sunday’s group skate

However, they still made it through to next week after Candice Brown and Lemar ended up in the skate-off.