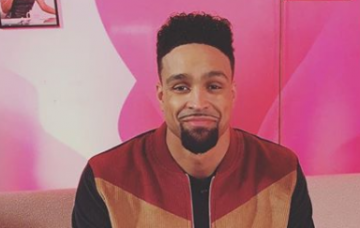 Diversity dancer Ashley Banjo has melted his fans’ hearts by revealing his family have a new addition.

The Dancing On Ice judge and his wife Francesca Abbott have welcomed a new puppy called Melvin into their home.

And Ashley has admitted the little pup won’t be so tiny for long as he’s a Great Dane!

Sharing a picture of him cuddling the cute puppy with his 247k Instagram followers, Ashley wrote: “Meet Melvin the Great Dane Puppy at 8 weeks old! The newest member of the Banjo Household… @francescabanjo and I are a little bit in love already.”

He added: “I’m sure there will be a lot more pics to come, he won’t be this small for long! #newpuppy #greatdane.”

The picture quickly gathered thousands of likes and dozens of comments as Ashley’s fans couldn’t get over how adorable Melvin looked.

“He’s the cutest thing ever,” one wrote. Another said: “He’s beautiful and perfect addition.”

Another warned the former BGT champ: “He will be a donkey, look at the size of his feet wow he going to be huge aww cute.”

Ashley and Francesca are well-prepared for how much Melvin will grow as they already own a Great Dane called Oscar.

In contrast, the couple also have a little dog, a Chihuahua called KP.

Ashley often shares snaps of his pets on social media and he’s proclaimed: “Anyone else love their dogs more than they love most people!?…”

The 29-year-old recently stripped off with a number of other celebs including James Argent and Jeff Brazier for The Real Full Monty Live.

Ashley choreographed the routine which was performed to raise awareness of prostate and testicular cancer and encourage men to get regular health check-ups.

He also choreographed a female version urging women to check their breasts for lumps, starring celebs including Michelle Heaton and Coleen Nolan.

Teenage sweethearts Ashley and Francesca, who have been married for eight years, are often asked if they might have children but she wrote in an Instagram post in January: “Just the fur baby banjos for now @ashleybanjogram.”

They are set to welcome a new nephew soon though, as Ashley’s brother Jordan is expecting a son with his partner Naomi Courts.

Read more: Alesha Dixon reveals not a day goes by without her ‘longing’ for another baby

The Banjo family keeps on growing!

What do you think of Ashley’s new addition? Leave us a comment on our Facebook page @EntertainmentDailyFix and let us know what you think!