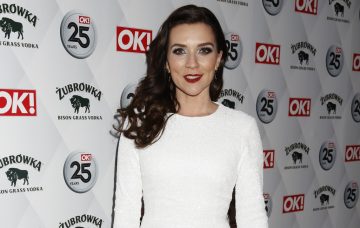 She married her fiancé in a French Chateau

Dancing on Ice star Candice Brown has made a surprise announcement to her fans, revealing that she got married!

She announced that she and partner Liam Macaulay had tied the knot with a simple message on Twitter saying, “Got married didn’t we.”

The Great British Bake Off winner also took to Instagram to celebrate her marriage, sharing a photo to Instagram Stories.

The photo showed Liam at a distance and featured the caption, “My husband.”

Her fans and friends were quick to respond to the news, sharing their congratulations with the couple.

It’s been reported by Hello! Magazine that the pair got married in a French chateau, with guests including Candice’s Dancing On Ice partner Matt Evers, and the couple’s two dogs Dennis and Sybil.

After sharing the news, Candice tweeted her gratitude to fans who had wished her and Liam well – saying the experience has been emotional.

“The congratulations & love we have received is incredible!” she said. “Thank you so much for all your kind words! I keep bursting into tears (of complete overwhelming happiness & joy).”

She went on to respond to negative comments she’d received, saying she hoped those posting them would find their own happiness.

“To anyone posting negative comments – I hope one day you experience the love and happiness we have❤️ #wife,” she said.

She also confessed that she and her new husband had decided to delay their return home, choosing instead to stay in France for a brief honeymoon – sharing that the pair had both come down with a cold.

“So we were going to come home today but we decided to stay for a mini moon in france!!” she said. “Now where’s that red wine #wheninfrance #wearealsofullofcold 😷”

Candice first came to fame on The Great British Bake Off in 2016, winning the competition.

She then joined the cast of Dancing on Ice earlier this year, but was the first contestant eliminated.

Do you want to congratulate the newlyweds? Leave us a comment on our Facebook page @EntertainmentDailyFix and let us know what you think!