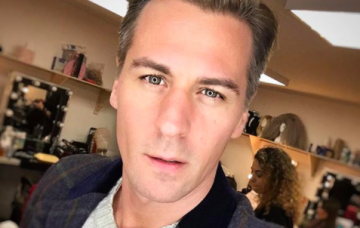 Dancing On Ice’s Matt Evers has spoken about professional dancer Brendan Cole’s axing from Strictly – and says he wants him to join DOI!

Writing in his weekly column for Best magazine, Matt, 41, said: “I’m enjoying the rumours about former Strictly pro Brendan Cole potentially moving to Dancing On Ice as a judge!

“I think having a pro dancer or skater who’s been on the other side of the fence is a great idea. He’d make a fab judge – whether on Strictly, DOI or any other such show.”

Matt has been on the ITV skating show for all nine series. He’s been partnered with winner, Suzanne Shaw and came second when he skated with Jorgie Porter.

It was two weeks ago that Brendan, 41, announced Strictly bosses’ shock decision to axe him from the show.

Speaking to Lorraine Kelly on her ITV show, he said: “This is quite hard to talk about. The BBC haven’t renewed my contract – we get renewed year on year – and they made an editorial decision not to have me back on the show.

Since then, the pro dancer has been tipped for a new job on just about every reality show going, from Dancing On Ice, to America’s Dancing with the Stars, to I’m A Celebrity… Get Me Out of Here!

Support for the dancer has come from all corners, too, with celebrities Vicky Pattison, Anton du Beke, Zoe Ball and Peter Andre all speaking publicly about their disappointment at the decision.

One adorable seven-year-old superfan called Lucy even started a petition to pressure BBC bosses into giving the star his job back.

Sadly, so far, the show bosses haven’t caved, and their only comment has been a statement on Twitter that read: “We’d like to thank Brendan Cole for being part of the show since the beginning – winner of the first series – and for the contribution he has made to its success.

Fingers crossed for the DOI job then, eh Brendan?

Read more: DOI star reveals how she suffered a stroke aged only 24

Do you think Brendan would fit in well on Dancing On Ice? Leave us a comment on our Facebook page @EntertainmentDailyFix and let us know what you think!