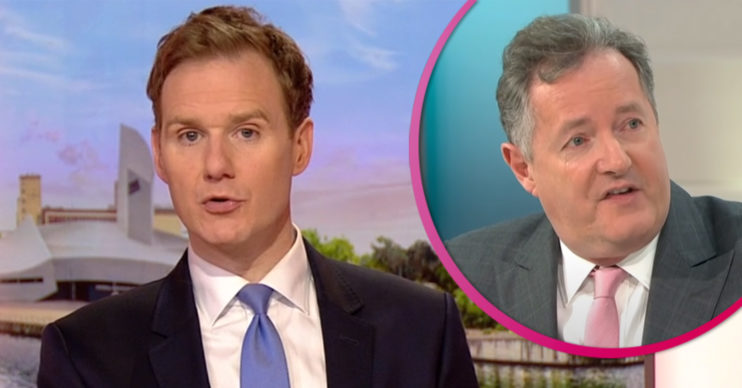 The pair have been TV rivals for years

Dan Walker has taken a swipe at Piers Morgan over his GMB departure.

Piers, 55, made the decision to leave the ITV programme following backlash and complaints over his comments about Meghan Markle‘s Oprah revelations.

Now, his TV rival Dan responded to the news on Twitter and asked Piers whether he’d like to appear on BBC Breakfast.

What did Dan Walker say to Piers Morgan?

His followers were divided over the tweet, with some people calling it “rude” and “uncalled for”.

One person said: “That’s just plain rude and uncalled for @mrdanwalker. Like or dislike Piers, he asked the questions we all wanted to know.”

Another wrote: “Thought you were better than this Dan… how disappointing.”

One added: “Was that really necessary???  Do we really need the petty sarcasm and spiteful jibes?”

However, others took his tweet in a playful way.

One tweeted: “HAHAHA, the savageness.”

Sorry to hear the news about your departure from GMB @piersmorgan

Another said: “Dan….. You sir have won the Internet today.”

Meanwhile, on Wednesday (March 10), Dan appeared to make another dig at Piers on Twitter.

He told his followers: “To all the shouty, sweary people telling me I’m nothing like you know who… thank you.

“If you want a programme happy to exploit issues like mental health to create controversy, division & clicks I’m delighted to say… you’re in the wrong place.

“Have a wonderful Wednesday.”

Dan and Piers clash over Meghan

Elsewhere, on Tuesday, Dan mocked Piers after he walked off GMB following a clash with co-star Alex Beresford over the Duchess of Sussex.

We could make some space for you in the morning.

Dan shared a selfie with BBC co-star Louise Minchin and wrote: “This was taken a few seconds before I stormed off set because Carol said it was going to be chilly this weekend.”

However, Piers replied: “I’m surprised BBC bosses didn’t storm in and drag you off set after yesterday’s ratings came in.”

I’m surprised BBC bosses didn’t storm in and drag you off set after yesterday’s ratings came in. https://t.co/q3ip93hpTW

Dan then wrote back: “Congratulations on your ratings. Ours were good too.

“In other news… I hope my boss would have dragged me off set if I’d used my platform – on national TV – to tell a pregnant woman, speaking openly about suicidal thoughts, that I didn’t believe a word she said.”

Read more: Ranvir Singh appears to make dig at Piers Morgan as she fills his seat on Good Morning Britain

Meanwhile, Piers has recently vowed he will be back.

Speaking from his home on Wednesday morning, the presenter said: “I think it’s fair to say, although the woke crowd will think that they’ve cancelled me, I think they will be rather disappointed when I re-emerge.

“I would call it a temporary hibernation.”

Do you want Piers to return? Let us know on our Facebook page @EntertainmentDailyFix.