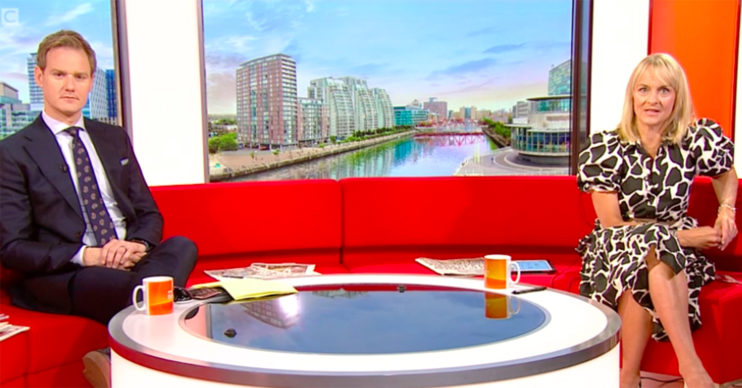 Presenter had been to do an outside broadcast

The BBC veteran, 51, was caught out wearing trainers while presenting on the popular news show.

Dan, 43, was co-presenting with Louise when he pointed out that she wasn’t wearing her usual high heels.

Louise had temporarily left the BBC studio to interview a Chester Zoo representative and Brendan Rendall.

The pair explained how they are raising money to save the zoo – which has been suffering financially since the lockdown.

And when Louise returned to the red sofa with Dan, she forgot to swap her trainers for her heels.

“I haven’t managed to change my shoes yet”

Dan teased her for talking to Brendan – who was dressed as a rhino.

He asked: “Are you alright after the rhino?”

Louise replied: “Do you know what, it’s really nice to be outside.”

She then glanced down at her feet and realised she had yet to change back into her white high heels.

She admitted: “I’ve realised I haven’t managed to change my shoes yet.” 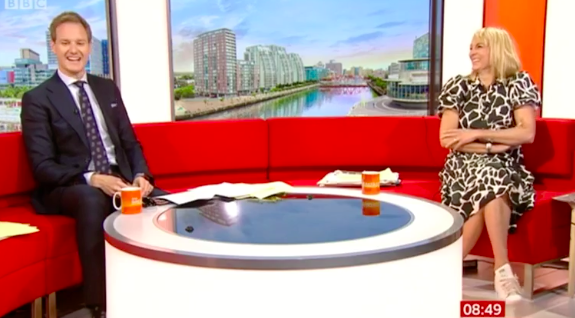 Earlier on in the episode, some eagle-eyed viewers even spotted her pair of trendy Stan Smith trainers lurking on set.

In clear view of the cameras, the trainers were resting just inches away from Louise as she sat on set.

Quite a few viewers chimed in via Twitter and remarked on the casual footwear’s television appearance.

Another user quipped: “@louiseminchin rocking Stan Smith’s trainers on #bbcbreakfast. Must be on trend…”

And a third asked: “Running late Louise? Whose are those trainers behind the table?? Just caught a glimpse on @BBCBreakfast.”

The on air blunder comes just hours after Louise said she desperately wants a haircut.

Addressing her some 192,800 Twitter followers she shared a snap of herself and Dan on set.

“Deffo time for a haircut”

She captioned her pic: “Good morning, and hopefully, amongst other things hairdressers will open on the 4th of July. It’s deffo time for a haircut for me anyway!”

Indeed her report included exploring how hairdressers are set to open from early July.

Good morning, and hopefully, amongst other things hairdressers will open on the 4th of July. It’s deffo time for a hair-cut for me anyway! pic.twitter.com/dObAlgHaej

However, many of Louise’s fans argued that her hair looks great, and also praised her outfit.

And a third tweeted: “Your hair looks great Louise.”