Dan's had enough of the naysayers!

Dan Walker has hit out at anti-vaxxers after he covered the Pfizer/BioNTech COVID vaccine announcement on BBC Breakfast.

The BBC star, 43, covered the breaking news that the vaccine has been deemed safe for use by scientists.

And that it could be administered to Brits as early as next week.

But this breakthrough vaccine has caused some backlash, particularly on social media.

Anti-vaxxers have come out in full force, with many questioning the safety of the vaccine. 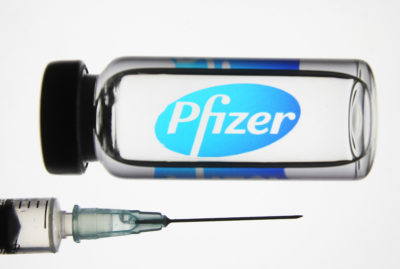 What has Dan Walker said about the new COVID vaccine?

However, Dan addressed this issue on Twitter, and appeared to mock anyone that questions the COVID vaccine’s validity.

Addressing his some 671,000 Twitter followers, he tweeted: “So far today we’ve heard the Health Secretary, the medical regulator, prominent epidemiologists, immunologists and experts all say this vaccine is safe & no corners have been cut. Dave off twitter says his mate reckons it’s ‘well dodgy’.”

Read more: Who will get the COVID-19 vaccine first in the UK?

One user commented: “Exactly. If you have no knowledge of drug development and the regulatory approval process please don’t assume you know more than the experts. There is too much at stake to politicise this and the scientific and medical community have worked their a***es off to do this.”

How are Dan’s fans reacting?

While another user concurred: “Having worked in clinical research for over 18 years I know the process and procedures to approval. If it’s passed the MHRAs stringent approval process I’m happy!”

And a further user argued: “Do all you doubters actually think the government would risk a lot more people needing to go to the NHS?

“And the economy dying? Of course it’s safe, have a little trust instead of spreading fear.”

So far today we’ve heard the Health Secretary, the medical regulator, prominent epidemiologists, immunologists and experts all say this vaccine is safe & no corners have been cut.
Dave off twitter says his mate reckons it’s ‘well dodgy’.

However, just as many appeared to disagree with Dan. While some took offence to him making a mockery of the name Dave.

Why are some Brits against having the vaccine?

One user tweeted: “That’s so dismissive Dan. People are rightly scared. No one truly knows the side effects or the long term effects of this and they can’t do. It is very very quick turnaround (understandably) but there is a healthy medium between pro vaxx and tin foil hat crazies.”

Another user argued: “To be fair Dan people pedalling a vaccine to get the country up and running again aren’t exactly salt of the Earth stuff trustworthy!!

“Injecting anything into your body is a huge risk, Dave off Twitter is entitled to his uneducated opinion, just as you are giving yours.”

And yet another claimed: “Whilst that is completely true, I think mocking people who don’t believe the vaccine is completely safe is the wrong thing to do.

“Most vaccines are tested for years before approval. This one hasn’t been. Don’t think you can blame people for being cautious about it.”