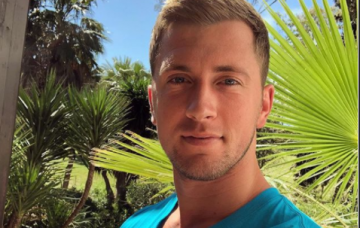 When you’re feeling blue, only a hug from your big brother will do!

That’s the case for Dan Osborne and Jacqueline Jossa’s little girl, Ella, who is seen having a cuddle with her half brother in a snap their dad shared on Instagram.

In the image, the siblings can be seen sat on a sofa with Teddy, four, comforting Ella, three, who buries her head in his shoulder.

TOWIE star Dan writes that Ella needed some TLC after suffering a mishap.

“Ella hurt her lip and wanted cuddles from her brother to make her better,” he wrote, adding, “they melt my heart so much!”

More then 33,000 of Dan’s fans liked the picture and over one hundred commented on it.

Many said how “cute” and “adorable” it was.

“This is the cutest thing ever!!” one of his followers declared.

“Sibling love, so cute,” another agreed.

“Such a sweet pair! It’s so wonderful that they know they can rely on each other for anything!” wrote a third.

Others pointed out how much Teddy, who Dan had with previous girlfriend Megan Tomlin, looks like his dad, while Ella is the double of her soap actress mum.

“He is Dan jr literally, he looks so much like you,” one wrote.

“Teddy is your double,” another told him, while a third observed, “That’s a mini you and Jac, how gorgeous are they both melts your heart.”

Former EastEnders star Jacqueline and Dan are currently having problems in their relationship as they expect their third child together.

He has reportedly moved out of their family home after a series of rows.

Many of his fans used his latest Instagram post as an opportunity to urge him to work things out with his pregnant wife.

“Family is everything. Wishing u all such happiness and when the newest addition arrives, I hope he/she brings you all that bit closer again,” one wrote.

“So sweet I hope and pray you and @jacjossa manage to move forward as a couple, you are perfect from a outsider’s opinion,” wrote another.

A third said: “I really hope you work things out. There’s a quote I love….’no one said it would be easy, but it would be worth it'”

Over the weekend, the Daily Star Sunday reported that Dan had told them he was “staying with a mate” after “arguing with Jacqueline.”

They quoted him as saying: “I will move back to help before the birth and with the baby, but I don’t know after that. The main priority is the kids.”

However, Dan later denied on Twitter that he had spoken to the paper.

“Apparently I’ve done an ‘exclusive interview’… I haven’t done an interview with anyone about anything, let alone my private life… getting boring now people.”

Previously Jacqueline had tweeted to ask fans not to comment on their relationship while they try to work things out.

“No one needs to comment and get involved in things they don’t know anything about. Daniel and I are dealing with things privately as a team,” she wrote.

During a recent appearance on Loose Women, she confirmed there were some issues at home but said she was OK.

“I’m good, honestly I’m fine,” she said. “I think, you know, when stuff goes on at home, it’s not normal to be everywhere, and it’s not necessarily true, or the reasons why you’re not getting on at the moment.”