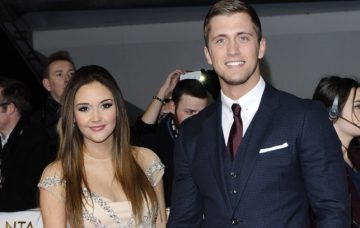 Dan Osborne has said he’s not planning to have any more children with wife Jacqueline Jossa but “never say never”!

The Celebrity Big Brother housemate has just got back together with former EastEnders actress Jacqueline after a brief split earlier this year.

He told Closer magazine the couple are “better than ever” having patched up their differences.

Read more: Dan Osborne and Jacqueline Jossa reveal promise to each other

“Jacqueline and I are all good, back living together and back to how we were. I’m at one of the happiest times in my life ever, really,” he said.

“We’re better than ever.”

Dan, 27, and Jacqueline, 25, are parents to three-year-old daughter Ella and Mia, three months, while Dan is also dad to Teddy, four, from a previous relationship.

And that’s enough for now!

When asked if he and Jacqueline will ever expand their family, Dan said: “I’m not planning any more kids at the moment, but I don’t know. My CBB housemate Sally Morgan predicted I’d have two more, but it wouldn’t be any time soon. We’ll see!”

Jacqueline, meanwhile, is slightly more confident there won’t be any more kids in her future!

The soap star recently told OK! Magazine: “You never know what’s going to happen but I can’t see us having any more kids. Two is enough for me!”

The couple split in May this year after going through a rocky patch, but have now patched up their differences and confirmed last week they are officially back together.

Dan has said being locked up in the CBB house for three weeks made him realise how much he loves and appreciates his wife.

“I know [being in Big Brother has] changed me a lot as a person for the better,” he said after the show.

“I’ve definitely seen what I’ve done wrong and all I want is a happy home for all of my family, kids and I obviously want my wife to be happy as well. I know I’m not perfect, I don’t think anyone is, but having time in there makes you appreciate what you have, and the time I have with my children.

Are you happy that Jacqueline and Dan are back together? Leave us a comment on our Facebook page @EntertainmentDailyFix and let us know what you think!