Dan Osborne has spoken out on Twitter following revelations he has split up with his pregnant wife, Jacqueline Jossa.

The TOWIE star said he’s been at the brunt of unfair abuse since it was reported he’s moved out of their family home following a series of rows.

It has been alleged the pair’s relationship has hit “a rocky patch” after Dan spent time away working abroad, leaving a heavily pregnant Jacqueline, 25, to care for their daughter, Ella, three.

Defending himself on Twitter, Dan wrote: “Whenever a relationship goes through tough times etc.. why is it always the man that gets stick..?”

He added: “When in ‘public eye’, worst part is, the people trying to give me stick etc are people that DO NOT KNOW ME, do not know the situation.. so can please p*** off…. appreciated.” 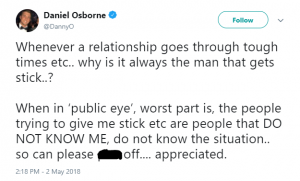 The latter remark is in reference to pictures of him on a yacht during his time away with Love Island’s Gabby Allen, who has been staying at the same “holistic bootcamp” in Marbella as him.

Dan, 26, who also has a son, Teddy, four, from a previous relationship, already hit out at a follower on Instagram who criticised him over the images.

They wrote alongside a picture he had posted with Ella and Teddy: “I’m sure his pregnant wife wasn’t one bit happy to see him all over the papers cosy with another woman last week. He doesn’t act like a married man.”

Dan replied to say: “‘Cosy’ with another woman. I am speaking and laughing with a friend. But of course, a man and a woman can’t be friends in this day and age can they. Also, you don’t know me, don’t know how I ‘act’.”

Jacqueline previously spoke out on Twitter to ask people to stop with their “nasty comments”.

The former EastEnders actress wrote: “No one needs to comment and get involved in things they don’t know anything about.

“Daniel and I are dealing with things privately as a team, there is always two sides to every story. Stop with the nasty comments, no one deserves them. Trust me. Privacy please x.”

News that the pair were having problems came as a big shock to their fans as the couple are expecting their second child together this summer.

Jacqueline had previously talked of how happy they were following their big wedding last year.

A few weeks ago, she posted on Instagram about how much she and Dan had enjoyed a date night at the London premiere of Rampage.

The couple also recently got a husky puppy called Storm.

In light of all the speculation over their relationship, Jacqueline updated her Instagram Stories this week to instead ask her fans to focus on “something positive” by voting for her to win Scene Of The Year at the British Soap Awards.

She’s been nominated alongside her on-screen sister Lorna Fitzgerald, who played Abi, for their spectacular fall from the Queen Vic roof on Christmas Day.