He's been married to former EastEnders star Jacqueline Jossa since 2017

The former TOWIE star took to Instagram overnight to unleash his annoyance over all the ongoing speculation, and told fans he’s focusing on his children.

He told followers that Ella, three, and Teddy, four, are his “world”.

Alongside a photo of Ella and Teddy hugging each other, Dan said: “That is what life is all about, being happy, taking care of your children, raising them the best you can and making sure you do everything you can to make sure their beautiful little faces are smiling.”

He added: “Making sure they are always in a happy environment and growing up to be the best people they can be 🙌🏼💙💗 these two little humans are my absolute world!”

Dan shares daughter Ella with Jacqueline, and has son Teddy from his previous relationship.

Jacqueline is currently 32 weeks pregnant with her and Dan’s second child.

The couple’s marriage has been making headlines for the last few days, but Dan spoke out on Instagram overnight to hit back at much of the speculation.

The former reality star went on to slam the “non-stop negative” stories being written about him, saying nobody ever wants to write about the positives in life.

He previously slammed claims the rumoured rocky patch was as a result of him working abroad, after it was suggested his recent fitness bootcamp with pals in Marbella had been the issue.

There were also reports – which Dan vehemently denied – that he’d been using Love Island’s Gabby Allen, 25, as a shoulder to cry on amid his alleged marital woes.

Dan’s latest comments come after he took to Twitter last week to deny rumours swirling as to the reason behind his and Jacqueline’s rumoured troubles.

At the time, he told fans: “Whenever a relationship goes through tough times etc.. why is it always the man that gets stick..? When in ‘public eye’, worst part is, the people trying to give me stick etc are people that DO NOT KNOW ME, do not know the situation.. so can please [bleep] off…. appreciated. 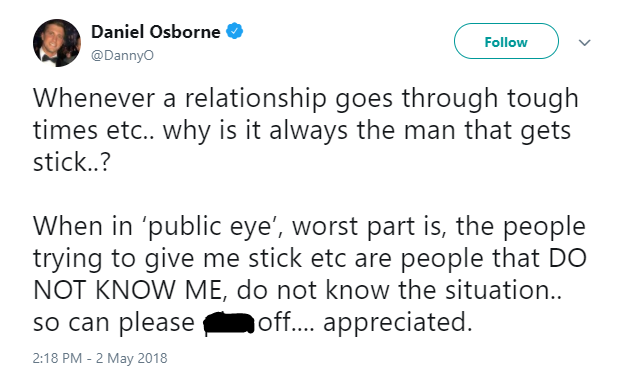 The boat comment was in response to photos showing him sharing a laugh with Love Island’s Gabby while with a group of pals on a yacht in Marbella.

Jacqueline, meanwhile, appeared on ITV’s Loose Women on Friday, where she briefly touched on the reports but did not dwell on them.

“I think when stuff goes on at home it’s not normal to be everywhere, and also it’s not necessarily true or the reasons why you’re not getting on at the moment.”

She reiterated: “I’m all good.”

Jacqueine had previously tweeted: “No one needs to comment and get involved in things they don’t know anything about.

“Daniel and I are dealing with things privately as a team, there is always 2 sides to every story. Stop with the nasty comments, no one deserves them. Trust me. Privacy please x.”

Jacqueline and Dan married in 2017.

Just two weeks ago, Jacqueline told Closer mag that she and Dan are stronger than ever.

Jacqueline added that she and Dan are focused on their children, calling Dan an “incredible” father.