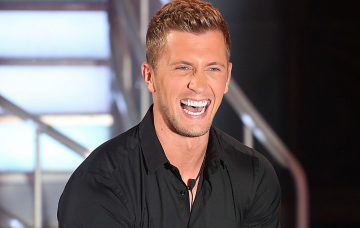 Former EastEnders star was cheering Dan on from home!

Dan Osborne has said wife Jacqueline Jossa chose not to attend Celebrity Big Brother’s finale because she didn’t want to be on TV.

The former TOWIE star, 27, finished the series in third place but wasn’t greeted by wife Jacqueline, 25, when he exited the house on Monday night.

Speaking to Metro afterwards, he explained: “She didn’t want to be on TV and there wasn’t really anywhere for her to wait around.

“She said she just wanted me to have my time, go to the party with everyone and then see her when I get home.”

Dan said he’s not yet met up with Jacqueline or his three kids but is looking forward to getting home and seeing them.

He told reporters he’d spoken to Jacqueline on the phone, though, and told her how much he loves her.

Former EastEnders star Jacqueline had already told fans she wouldn’t be at the finale, suggesting it would be “weird” given she and Dan are still working through their marital difficulties.

The couple experienced a rocky patch earlier this year which saw Dan move out of their family home.

He moved back in just before entering Big Brother on August 16 and Jacqueline said in an interview last week things were going well but they weren’t “officially back together” just yet.

She told OK! Magazine: “I hope he wins but I won’t be there at the final. I think that would be a bit weird. We need to talk when he’s back and see where we both stand.”

Although Jacqueline wasn’t there, she had been urging fans to vote for Dan to win.

In a message to fans, Jacqueline said Dan has “changed a lot of people’s opinions” about him and truly deserves to win.

She wrote: “Okay. He’s made it to the final and I am so happy for him. Imagine if he wins. He’s changed a lot of people’s opinions and deserves this moment.

“Please pick up the phone and vote and make it all worth it.”

In the end, it was former Coronation Street star Ryan Thomas who won, with Hollywood actress Kirstie Alley finishing second.

Jacqueline was cheering Dan on from home, sharing a photo to Instagram Stories with friends to congratulate him on finishing third.

She shares daughters Ella, three, and baby Mia, born in June, with Dan.

Dan told Emma Willis in his CBB exit interview: “I know [this experience] changed me a lot as a person for the better. I’ve definitely seen what I’ve done wrong and all I want is a happy home for all of my family, kids and I obviously want my wife to be happy as well.

I know I’m not perfect, I don’t think anyone is, but having time in there makes you appreciate what you have, and the time I have with my children.