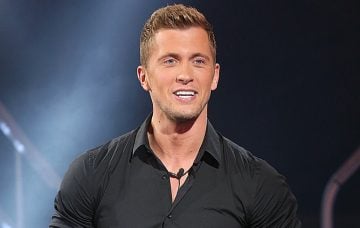 The 27-year-old posted a stunning shot to Instagram on Thursday showing him planting a kiss on little Mia’s cheek as they stood outside in the sunshine.

They’re also parents to daughter Ella, three, and Dan has a four-year-old son called Teddy from a previous relationship.

He shared a photo from the airport on Wednesday afternoon showing him posing with co-stars Chris Hughes from Love Island, Made In Chelsea’s Mark Francis Vandelli and TOWIE’s Bobby Cole Norris.

Dan’s just been reunited with his family after three weeks locked up in the Celebrity Big Brother house, but he assured fans he won’t be away for long as he’s only filming abroad for a weekend.

He entered the famous CBB compound on August 16 and emerged in third place last week.

Dan signed up for the show following a rocky patch in his marriage, with wife Jacqueline admitting in an interview earlier this month they weren’t “officially back together” when Dan entered CBB.

There had been recent rumours that Dan and Jacqueline rowed after the CBB finale as he was allegedly unhappy she was not at the studio to meet him.

However, they rubbished speculation of a fallout on Sunday night by sharing a sweet selfie from a date night.

A rep for Jacqueline, 25, told The Mirror: “She was not at the final at Elstree Studios as she did not want to be on TV. Dan was upset Jac wasn’t there but all was sorted amicably and the situation quickly resolved. Jacqueline is very proud of Dan’s achievements in the house.”