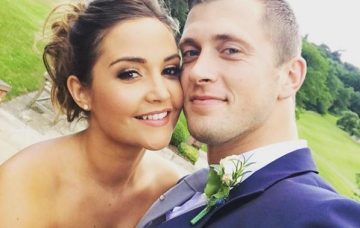 He has shared a picture

Dan Osborne has confirmed he has moved back into the family home he shares with wife Jacqueline Jossa, by sharing a sweet picture of him snuggled up in bed with their daughter Ella.

Dan, 26, captioned the Instagram Stories photo ‘Morning’ and added a love heart over his and his daughter’s head.

The news comes just a day after he and Jacqueline were reunited for a family walk with Ella, three, Dan’s son from a previous relationship, Teddy, four, and their Husky puppy, Storm.

Last month, Dan moved into a friend’s house after cheating allegations emerged (which he has denied), and the couple, who mark their one-year anniversary this month, were said to have struggled while he was away working in Marbella.

Yet although they appear to be playing happy families for the sake of the children, a friend close to the couple has told The Sun that Dan and Jacqueline have not reunited, and that he is there to help her in the weeks leading up to the birth of their second child.

“He’s moved back in primarily to care for the children, as well as Jacqueline, and they’re getting on well,” they said.

“We are all hoping they can sort out their problems.”

Meanwhile, Jacqueline, 25, has been showing of her blossoming bump on Instagram Stories, and the former EastEnders actress looks ready to pop!

Just days after Dan moved out of their home, Jacqueline revealed that he would definitely be at the birth of their second child, presumably whether they were back together or not.

Last month she told OK! Magazine: “Dan will be with me. I’m going to stick to who I had last time, so I just had my mum and Daniel. I might have Daniel’s mum. It just depends where we all are.”

Jacqueline hinted to fans yesterday (June 7th) that her baby could arrive in days, writing: “Not long now.”

Although they have decided not to reveal the sex, fans have speculated that Dan and Jacqueline are set to welcome another daughter.

Jacqueline previously posted a video onto her vlog, in which she described her unborn baby as a ‘she’, but quickly deleted the post.

Whatever Jacqueline decides to do, fans have been sending the TV star messages of support at what must be a nerve-wracking and emotional time.

“Good luck Jac, you will be fine with your little girls,” wrote one follower.

Another agreed: “You’ve been through so much through the pregnancy and you’ve come out on top, stronger than ever! It will be so worth it once the little baby’s here.”

Would you invite your ex to watch the birth of your child? Leave us a comment on our Facebook page @EntertainmentDailyFix and let us know what you think!