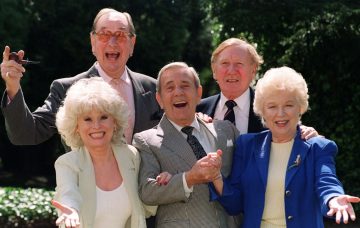 National treasure passed away on Friday

Dame Barbara Windsor has paid a touching tribute to Dame June Whitfield, recalling how she was an awe-inspiring role model who became a lifelong friend.

The veteran actress, best known for her roles in comedies Terry And June and Absolutely Fabulous, died aged 93 on Friday.

News of her death prompted an outpouring of tributes from stars, a number of whom remembered Dame June for the kindness and generosity she showed to them early in her careers.

Dame Barbara, 81, told the Daily Mirror: “At 15 years old, I landed my first West End theatre role in Love From Judy and I was lucky enough to work with the wonderful and highly talented June Whitfield, who was one of the leading ladies.

“Not only was June a lovely lady who I learnt a lot from but I made up my mind to try and be like her.

“I was in awe of her. Our friendship lasted up until her passing. I am truly sad and she was a great lady. May she rest in peace.”

The pair worked together on the Carry On films that propelled Dame Barbara to the heights of fame.

The former EastEnders star’s husband, Scott Mitchell, said the dames had remained in contact by phone and last spoke a couple of months ago.

Jennifer Saunders led the flood of tributes to Dame June on Sunday, saying she “lived and worked with an extraordinary grace”.

The pair played mother and daughter in Absolutely Fabulous for five series of the hit sitcom, as well as in the 2016 film.

Saunders penned the series, based on a sketch she created with Dawn French, and asked Dame June to play Edina Monsoon’s mother.

Joanna Lumley, who played Edina’s hard-drinking and promiscuous friend Patsy Stone, said she was “heartbroken” by her death.

Lumley told ITV News: “I am heartbroken to lose such a darling friend and shall never forget her sensational talent, humour and her generosity to us all who had the joy of working with her on Ab Fab.

“She will always have a most special place in my heart.”

Dame June “passed away peacefully” on Friday, according to her agent.

During her life in showbusiness, she tackled bawdy comedy in the Carry On films, and starred in the long-running sitcom Terry And June, as well as Absolutely Fabulous.

He wrote: “June Whitfield’s incredible career in British comedy stretched all the way from Hancock’s Half Hour to Absolutely Fabulous. She was always there, always being brilliant.”

And Spice Girls singer Emma Bunton paid her own tribute to Dame June, who made her feel comfortable on set when she appeared in Ab Fab

She wrote on Twitter: “Such an incredible lady with the warmest heart.

“I was so nervous working with her but she had a way of making you feel comfortable and special Thank you Dame June Whitfield.”