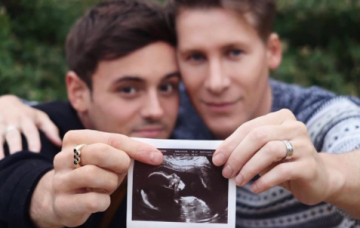 We're almost as excited as they are!

Tom Daley and his husband Dustin Lance Black announced the happy news they’re set to become fathers on Valentine’s Day, and now the excited pair have already started stocking up on baby supplies.

The Olympic diver, 23, and his filmmaker husband, 43, shared a picture of themselves larking around in a children’s store on Twitter.

In it, Dustin doesn’t seem to be taking their shopping trip too seriously as he’s dressed up in a unicorn headband striking a pose as Tom looks on.

Dustin shared the snap with the caption: “Let the #DADS shopping begin” followed by a man face-palming emoji.

The couple’s fans were delighted by the image with one telling Dustin: “I always knew you were really a magical Unicorn!  This proves it!  Your baby is going to be the luckiest little human in the world!  So lucky to have you two as #DADS.”

Another said: “You two are going to buy out every shop from LA to London, aren’t you.”

A third tweeted, “This is magical”, while a fourth wrote: “Omggggggg cuteeeee!! So happy for you two!!! That little one’s going to have two extremely wonderful dads!”

Others took the opportunity to speculate on whether they would be having a boy or a girl.

Tom and Dustin announced they are expecting on Wednesday as they both shared pictures of themselves holding up a baby scan on their respective social media accounts.

Dustin wrote: “A very happy #ValentinesDay from ours to yours” on his picture, while Tom simply said: “Happy Valentine’s Day” with hearts and a family emoji.

The pair are using a surrogate mother whose identity has not been disclosed, nor have they said who, if either, of them is the biological father. They also haven’t yet revealed the baby’s due date.

A source told The Sun: “They’re keeping all of the other details quiet for now, but may decide to reveal more at a later date.”

While many have wished the pair well as they become parents for the first time, Dustin took to Twitter yesterday to write a post, retweeted by Tom, which responded eloquently to some negative publicity and homophobia they have been subjected to since announcing their family plans.

He wrote with a picture of swimmers forming a heart shape: “My reaction to others’ hate, bigotry & misinformation will not include anger or hate. For me, the path forward is lit with curiosity, listening, correcting the record when possible, and as best I can, leading with an example of strength & love.”

What a great message! Congrats again Tom and Dustin!

Will Tom and Dustin have a boy or a girl? Leave us a comment on our Facebook page @EntertainmentDailyFix and let us know what you think!