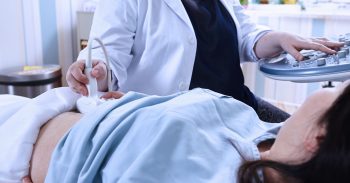 His wife was "upset" over the comments

A dad-to-be has been criticised for comments he made during his wife’s baby scan.

The anonymous man asked Reddit users whether he was in the wrong for “gently reminding” his wife that they were both the parents, “not just her”.

The guy said he and his partner were at an ultrasound for their first child when he upset her with his remarks.

He wrote: “Okay, so my wife and I are expecting our first child.

“She is seven months along and we got an ultrasound yesterday to check on the progress (my wife’s medical issues caused the [obstetrician] to be extra cautious).

“During the appointment, the tech was pointing out our daughter’s different body parts, telling us where the legs and feet are.

“It was the first time we didn’t really need the help, because we could see our baby looking like a real baby.

“My wife started crying, and I was comforting her, when she said the words, ‘I can’t believe I’m making a human being.'”

He continued: “I kept comforting her, but I waited a few minutes and, once the tech was gone, gently reminded her that we are both the parents, not just her.

“I also told her that saying she’s ‘making’ the baby on her own is not accurate, since I provided half the genetic material.”

The man said his partner felt like he doesn’t appreciate “what she’s putting her body through to be pregnant”.

He added: “Obviously this is false, especially since her pregnancy has been so tough that I’ve attended at least two doctors appointments every month.

“I show her with actions, not words, that I appreciate her.

“I just don’t think it’s fair to claim I haven’t contributed something to making our daughter. She is still upset the next day. So, AITA? [Am I the (bleep)].”

Many people disagreed and called the man’s remarks “insensitive”.

One person said: “I think some more compassion is due here. Your timing and method was pretty lousy.”

Another wrote: “Her body and hormones and blood volume are all changing. Yours isn’t. Appreciate what she’s going through from now on,” while a third added: “OK, [he] was probably a bit insensitive with his timing.”

However, others offered advice to the man.

Read more: GMB viewers outraged as woman insists ‘being gay is a choice’

One person said: “Don’t be too hard on yourself. What you said was not something that hasn’t been said before.”

Another wrote: “At least you understand what you did wrong.”

After reading responses from people, the man commented: “I’m an idiot. I don’t know what I was thinking. I’m gonna apologise and make it up to her however I can.”