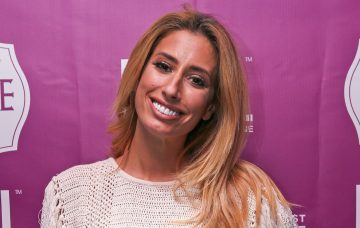 Stacey Solomon gets told off by her dad

And it led Stacey to gain a brand new celebrity friend!

Stacey Solomon had fans in hysterics after sharing a cheeky Instagram video showing her being told off by her dad.

The mum of two decided to wind her poor father up as he tried to set up lighting for her – and, of course, she got it all on camera!

In the short clip, naughty Stacey, 28, is seen wiggling her big toe at her dad as he tries to gather together all the equipment he needs to get the lights up and running.

She gleefully tells him: “This is your fault, dad. You’ve made me with one toe!”

There’s plenty of laughter in the background, before her dad says: “Stacey, do you want me to do this or not? Because I’ll stop. I’ll count to two. One… two….”

Of course, it was all just a bit of banter, and Stacey posted the clip to social media with the caption: “My dad still counts me down when he’s telling me off hahahahaha.

“Although it seems now I’m older I only get from 2 instead of the generous 3 he used to give me hahaha!

“Me and my brother and my beautiful toe just winding dad up for taking too long to set up our game light.”

😂😂😂 my dad still counts me down when he’s telling me off hahahahaha although it seems now I’m older I only get from 2 instead of the generous 3 he used to give me hahaha! Me and my brother and my beautiful toe just winding dad up for taking too long to set up our game light 😂😂😂😂😂😂😂😂😂😂😂😂😂😂😂😂

Fans were loving the glimpse at life in Stacey’s house, with one telling her: “I bloody love you!! So down to earth!! Even with the notoriety!! Just mum and toes stuff!! Love you.”

Another said: “You are sooo hilarious Stacey love your humour.”

A third added: “You are too funny! Made me belly laugh hard.” 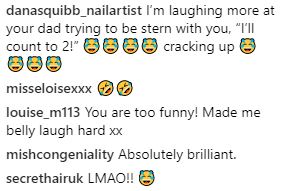 Other fans said their parents still warn them with countdowns, too, with one laughing: “My mum still counts to 3 for me I’m nearly 39! But to be fair I do it to my kiddies but I’m a little fairer and give them to 5.”

Even celebrities got in on the action, with Gaby Roslin commenting: “That’s made me laugh so much 😂😂😂 you are so fabulous.”

Nadia Sawalha chipped in: “Why am I giggling my head off at this!!”

However, there was one comment in particular that stood out to Stacey and, well, made her lose her cool!

Among the hundreds of comments was one from Stranger Things actress Millie Bobby Brown, 14, who told Stacey: “I love YOU so much!!!!! You’re so amazing and real and this video is hilarious!!!”

She added: “This comment has had me loosing my [bleep] A LOT!”

Stacey then said: “Ok we need to hang out!! I always knew deep down we would be friends!!! 💛 you are everything!!”

Millie happily agreed, replying: “Yes please I would love to! Next time I’m back in England I will let you know 💙💙.”

Stacey later went on Instagram Stories to reiterate just how excited she was to make a new celeb pal!

She shared a screengrab of one of Millie’s messages alongside the caption: “I can’t cope [right now].” 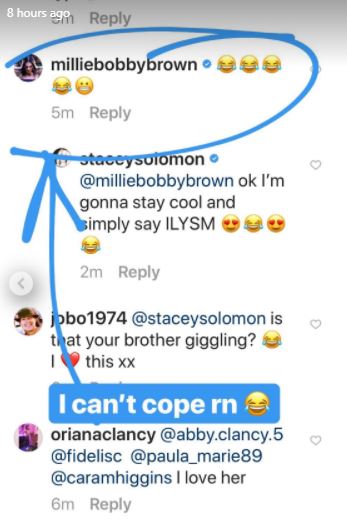 Meanwhile, Millie isn’t the only celebrity who has attracted Stacey’s attention lately!

Just yesterday the Loose Women favourite told fans she could retire from Twitter after Hollywood megastar Reese Witherspoon retweeted her. 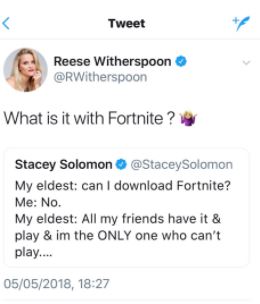 Stacey had shared a post about the popular game Fortnite, saying: “My eldest: can I download Fortnite? Me: No. My eldest: All my friends have it & play & I’m the ONLY one who can’t play. Me: let me play it and see. *Zach goes to bed* I’m now 2 hours in, dressed as some kind of Raven, on my way to Tilted Towers with 3 people I don’t know.”

Reese retweeted the message with the caption: “What is it with Fortnite?”

Stacey responded: “When @RWitherspoon retweets you  I can officially retire from twitter. Life MADE.”

Pretty good day all around for Stacey, then!

Have you ever been sent a message from a celebrity? Leave us a comment on our Facebook page @EntertainmentDailyFix and let us know!