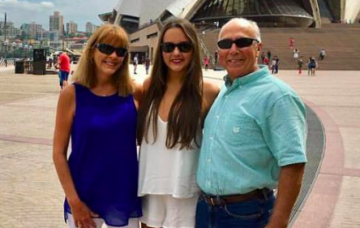 Prepare to weep into your Quality Street

A sweet story about a dad’s love for his daughter has gone viral, after a plane passenger shared their story.

Facebook user Mike Levy revealed how the man sitting beside him on a flight, named Hal Vaughan, had booked an astonishing SIX trips, so he could spend Christmas with his flight attendant daughter.

Taking to Facebook, the 31-year-old passenger shared two pictures of the dad and his daughter, Pierce.

Beside the shots, he wrote: “I had the pleasure of sitting next to Hal on my flight back home. His daughter Pierce was our flight attendant who had to work over Christmas ☹️. Hal decided he would spend the holiday with her.

“So, he is flying on each of her flights today and tomorrow around the country to spend time with his daughter for Christmas. 😊. What a fantastic father! Wish you both a very Merry Christmas!”

In a follow-up interview with ABC News, Mike explained: “I asked if he was going home or on vacation and he said his daughter was a flight attendant and so he was just flying around with her. She had to work and her father just followed her around the country.

“I thought that it was extremely special of him to do for his daughter, so that she didn’t have to spend Christmas Eve alone.

She wrote: “Dad’s first trip using his benefits was a success! A special thanks to all of the patient, wonderful gate agents around the country and my perfect crew. He made it on every flight and even got first class RSW-DTW (Christmas miracle).”

She also added a note to the passenger who had shared the post, writing: “Shoutout to Mike Levy for being a great first class passenger & helping us to understand how cool this actually is!”

Social media went wild for the heartbreakingly adorable story, and it was soon shared almost 40,000 times.

One fan of the tale tweeted: “The world needs more dads like this father.”

A second added: “What a wonderful Christmas gift for both of them.”

A third said: “Terrific, loving father. That’s what Christmas is all about.” While another wrote simply: “Awesome dad!!”

What a lovely Christmas story. We’re not crying YOU’RE CRYING.

Would you do this for your kids? Leave us a comment on our Facebook page @EntertainmentDailyFix and let us know what you think.