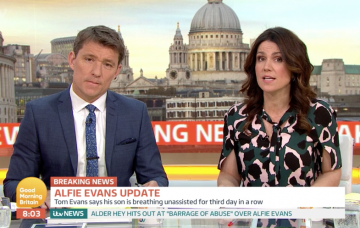 Show was speaking to the boy's father outside hospital

Viewers have blasted Good Morning Britain for cutting short an emotional interview with the father of tragic little Alfie Evans.

Dad Tom was speaking to reporters live outside Liverpool’s Alder Hey Hospital, where the toddler is fighting for life, when host Susanna Reid spoke over him and the picture switched back to the studio mid-sentence.

He had begun talking about his 23-month-old son’s treatment when the ITV breakfast show cut the link.

After going to a commercial break, it returned with money expert Martin Lewis talking about cheap easyJet flights,  Thorpe Park season tickets and Marie Claire magazine giving away a free tube of face cream with its latest edition.

Viewers were left shocked and criticised GMB on social media.

One tweeted: “Absolutely disgusting!! How dare they cut him off, I was waiting all morning for an update!!”

Tom told reporters: “For the third day now there’s been not one single problem with him. The nurses have just come in and said, ‘Wow, this child is still here’.

“What will we do is have a meeting with doctors at Alder Hey and now start asking to go home.

“Alfie does not need intensive care any more. Alfie is lying on the bed with a litre of oxygen going into his lungs. The rest is him (breathing).

“Some people say it’s a miracle. It’s not a miracle. He’s been off a ventilator for three days now. There’s been no deterioration.

“He hasn’t woken up, he’s still a little bit weak but what we ask for is to go home to sustain his life. What we’re doing now, we can do back home.

“There’s a child in the middle of all this. It shouldn’t be about costs, it should be about Alfie. He’s proved everyone wrong.”

At that point the programme’s director cut back to Ben Shephard and Susanna in the studio, to the dismay of many people watching.

It meant the cameras missed the moment Tom said he believed his son could “live for years” to come, despite medics giving Alfie no chance of a recovery.

Susanna said: “It’s a very difficult situation. The medical staff at Alder Hey are trying to do their absolute best in the best interests of Alfie but clearly Tom Evans has a different view.”

Why cut Tom Evans interview short when he started talking about the hospital!!! Lost all respect for GMB #GMB #ReleaseAlfieEvansNow

Omg why cut him short #gmb?? Why when he’s only saying what’s going on ?? Straight to the defence of the hospital ?? They need to release that little boy to his loving parents #alfieevens #alfiesarmy

@GMB Where did all that compassion suddenly go. Cutting Tom Evans off. It’s better not to bother at all than to pretend to bother. #AlfieEvans #Showsomerespect

@susannareid100 Very insensitive of GMB to cut short that very emotional public statement by Alfie Evans father Tom this morning…………..It looked awful for you and Ben!!

@GMB is @AlderHey that scared of Tom proving them wrong that you had to cut Toms interview off?! What happened to freedom of speech?! #ALFIESARMY16

A High Court judge yesterday rejected a request from Tom and Alfie’s mum Kate James to let them fly the boy to Italy for further treatment.

The child’s life-support machine was switched off on Monday. He remains in a critical condition.

* Good Morning Britain is on ITV weekdays at 6am.

Should GMB have shown all of Tom’s interview? Leave us a comment on our Facebook page @EntertainmentDailyFix and let us know what you think!