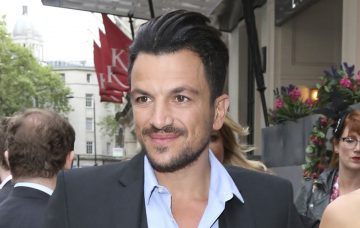 Peter Andre proved himself one smitten husband last night when he paid tribute to wife Emily with a cute selfie.

The ‘Mysterious Girl’ singer, 44, couldn’t resist uploading a snap of himself and Emily to Instagram alongside the simple-but-oh-so-sweet caption: “Love you E…….. that’s all.”

Naturally, the popstar’s fans were loving the intimate moment between husband and wife, and took to his comments section in droves to gush over the couple’s bond.

One said: “Such a beautiful lady you have Pete, but you know that already.”

Another wrote: “Perfect together u both look amazing and so happy to be with each other (sic).”

A third agreed: “Gorgeous couple and what an amazing photo of you both.”

And a fourth said: “Life goals, you pair are everything you have the best family ever.”

In a new interview with Fabulous magazine, the doting dad said getting married and adding to his family had been among the biggest highlights of the last decade.

He also revealed he’s a big ol’ romantic when it comes to treating his wife.

Peter said he always takes Emily abroad on her birthday, and two years ago he chose Venice as the destination – not that Emily had any clue where they were going!

He recalled: “When we got to the airport, I made her put on headphones and look down so she didn’t know where we were travelling to.

“I managed to keep it a secret until we got off the plane and onto the boat.”

Meanwhile, Pete’s made no secret of the fact he’d like to expand his family even further, but has admitted Emily is not as keen right now.

Speaking to the Mirror Online, Peter revealed: “All of a sudden I said I wanted another baby. It’s weird as I always said I don’t want to be changing nappies at 50, like Simon Cowell.

“[Emily’s] quite content not to have one and is full on back at work.”

Emily addressed Pete’s comments on ITV’s Lorraine last week, when she stood in for Dr Hilary Jones in the medical advice segment.

She said “maybe” when asked about more kids, before  saying: “[Peter] changes his mind! I remember him saying, ‘No, no, no, no more children’ and I think now Theo is sleeping a little bit more, he’s saying, ‘Oh, maybe we will…'”

But while Emily said “maybe” to the idea of more kids, it doesn’t seem likely to happen anytime soon.

Ever surprised your loved ones with a birthday treat? Leave us a comment on our Facebook page @EntertainmentDailyFix and let us know what you think!