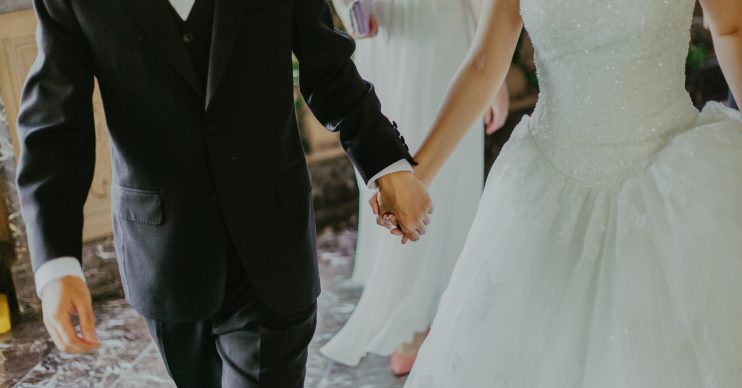 A mother-in-law has been criticised for having a “creepy” dance with her son at his wedding.

The anonymous woman was also seen “latching” onto her son in an awkward hug while his new wife watched on.

And what’s even more awkward is that the woman was also wearing a white lace dress for the occasion.

Read more: Wedding guest POOED herself on dance floor leaving everyone having to evacuate

Taking to Reddit, the bride’s uncle called her mother-in-law “creepy”.

He wrote: “Mother-in-law wore a sheer white lace dress to the wedding.

“[She] and groom had a creepy mother/son dance, and [she] latched onto groom in an awkward hug.

Fellow users were quick to criticise the mother-in-law for her antics.

One person commented on the post: “Jeez, I thought the newlyweds were dancing and the other woman in the wedding dress was the MIL. How does he not feel icky? I feel icky.”

Another wrote: “It’s kinda creepy that mum and son appear to have their foreheads touching.”

A third said: “Hurk. Ick. At first glance, I thought that the MIL was the one in the poofy dress. Wow. Where was a bridesmaid with the red wine or a gardener with a hose when you need them?!”

One ranted: “Am I the only one who thinks she should have been made to change or leave?!

“Like why the hell is she allowed to do the mother son dance after that [bleep]. I feel so sorry for your niece (who looks great).”

Another commented: “Wow. Just, wow. I feel so bad for the bride. Even without seeing her face, the body language shows how uncomfortable she was.”

One added: “OMG those pics are awful! The bride looks so [bleep] in both shots and rightly so. Yes, thank God they live 1000 miles away.”