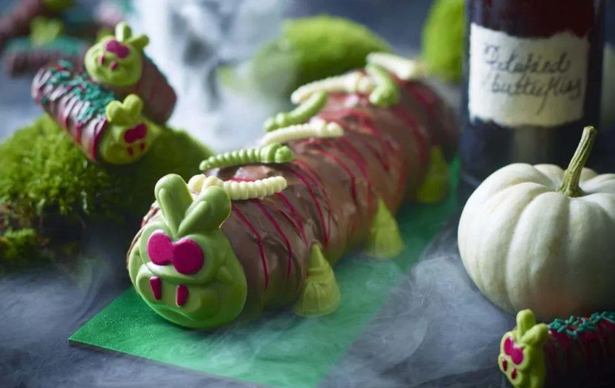 Plenty of delicious treats to sink your fangs into

Shoppers of M&S are licking their lips in anticipation of tucking into a Halloween-themed Colin the Caterpillar Cake… even if it looks to be covered in blood!

The very creepy creepy-crawly confection isn’t the first time the M&S food favourite has been given a seasonal makeover – a Christmas version is also due to hit the shops in the next few weeks.

However, Christmas Colin Cake is very different from Creepy Colin Cake, with the Halloween version decorated with splatters of ‘blood’, sugary maggots and piercing red eyes made of chocolate.

Similar to the regular Colin Cake, this dastardly bake’s feet and face are also made of choc. But in keeping with the spooky celebration, they’re green!

Coming with a £7 price tag, it also seems to be proving more treat than trick with customers – with many apparently keen on an extra slice.

“Haha, Colin is looking pretty dank for Halloween this year,” commented one person on Twitter.

“I love a Colin, even an evil Colin!” remarked another on Facebook.

A third joked: “Everyone needs a spooky Colin in their life.”