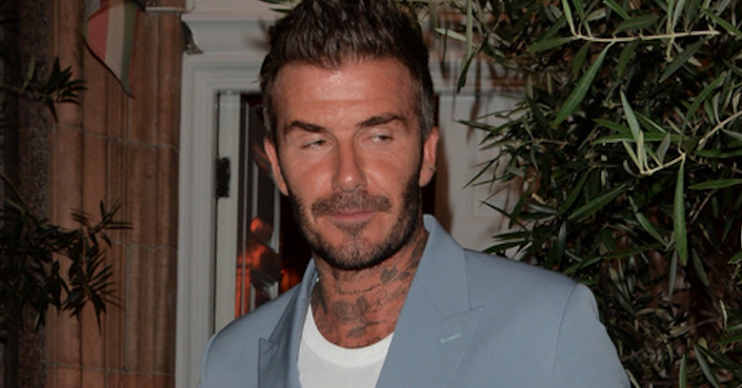 Snapped in a hot tub together

Friends star Courteney Cox has stunned fans and celebrities alike by sharing a snap that appears to show her hand on David Beckham‘s leg.

The worldwide TV star, 55, uploaded two snaps to Instagram on Friday showing her hanging out with Becks, 44, in a hot tub – sending followers wild in the comments section.

She captioned the post: “Too hot in the hot tub! #modernfamily.”

The actress wore a black bikini in the pic while a topless David leaned forward to pose for the camera – and amused fans couldn’t help but make a slew of gags about her Friends character ‘cheating’ on her on screen husband.

“I’m telling Chandler about this,” joked one Insta user.

A third remarked: “I cannot believe you’re cheating Chandler like that, I thought he’s the only man who you took a shower with.”

However, Courtney’s second image made it immediately apparent the photos were a tease.

Modern Family actors Jesse Tyler Ferguson and Eric Stonestreet also stripped off for a dip in what is believed to have been a bit of fun behind the scenes as Courtney and David filmed cameos for the hit US comedy.

Nonetheless, some very famous faces were happy to play along.

But eagle-eyed fans were still left wondering why Courteney’s hand was in contact with the former footballer’s pin  – even though they realised there was nothing to it.

“Where is your hand going?” laughed one follower.

“I see that hand, Courtney. Victoria sees it too,” joked another.

A third added: “Her hand in the second pic…”

Happy to have my ole pal and former @manchesterunited teammate @davidbeckham guest star on an upcoming episode of modern family. @courteneycoxofficial was there too. As was @jessetyler and others.

David explained in his own Insta post, showing him and Courteney reading a script: “I met a new FRIEND today at work @courteneycoxofficial #modernfamily.”

It seems the Beckhams could be regular viewers of the sitcom. The whole family visited the show’s set in 2017, posing for pics in the living room familiar to Modern Family fans.