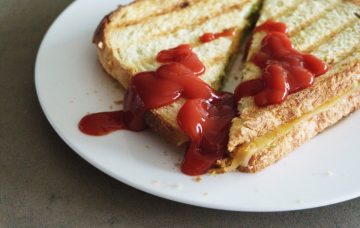 Hot snacks are TOAST at a Bristol park

Toasted sandwiches are off the menu in Bristol after concerns from councillors that hot food could attract troublesome gangs.

A food van has been barred from flogging the cheesy treats in a city park – although a provisional licence for the sale of cold food and drinks has been granted.

Plans to sell warm snacks in Monk’s Park in Biddestone Road came in for dozens of objections from local residents and the headteacher of a nearby secondary school, according to the Bristol Post.

The city’s public safety and protection committee heard earlier this week that the park has previously been ‘terrorised’ by young bikers and late night boozy incidents.

And it seems there are worries proposals for hot food could make the site one of antisocial behaviour yet again, as well as ‘luring’ students into truancy.

Councillor Claire Hiscott reportedly told committee members: “It’s right next to Orchard School, which is a challenging school that sometimes has a problem with keeping kids in school.

“They have to have patrols of staff to make sure kids don’t walk off site. The lure of a food concession may encourage kids to take a little walk.”

Reflecting on the efforts made to make the area safer and more appealing, she claimed the van could attract an unwelcome crowd.

Read more: Patient left in agony after being prescribed penis cream for her eyes

“Anything that’s going to be a gathering place is likely to bring that back. We’ve managed to eradicate that. It’s a nice quiet park,” said the councillor.

Planning and development officer Sue Long added a food outlet selling burger and chips, or items like cheese toasties, would not be considered – but the sale of coffee and ice cream would be looked at.

Permission was granted for the application on the basis any vendor operates between the hours of 9am and 6pm and does not sell hot food.

Who knew a bit of melted cheddar on some frazzled bread was such a public concern?