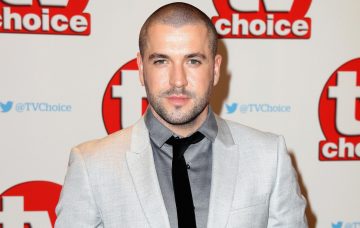 He won an award at the Inside Soap Awards

Shayne Ward sported a new look as he attended the Inside Soap Awards 2018 on Monday night.

The former Coronation Street actor sported a fuller head of hair which was slicked back with gel as well as a full, dark beard rather than his usual stubble.

Shayne, who played Aidan Connor on the soap, looked very dapper in a grey chequered suit paired with a navy shirt as he posed for pictures at the star-studded event.

Shayne took home the Best Exit Award at the ceremony for his departure from Corrie, which saw his character Aidan take his own life after secretly battling depression for months.

Show bosses worked closely with The Samaritans on the storyline, in order to highlight the tragic statistic that 84 men take their own lives in Britain every week.

Corrie viewers were full of praise when the soap aired Aidan’s devastating story earlier this year.

After winning the award, Shayne said he was humbled and overwhelmed by the impact the storyline had on people.

He told the Press Association: “It’s so overwhelming and so humbling. It’s a collective of people bringing a storyline and resonating with the people out there.”

He added: “We’ve got to deliver everything with truth and we’ve got to resonate with people at home.”

When asked if soaps should just be entertainment, Shayne insisted that social issues should be shown on screen.

He said: “We’ve got to use the voice that we have. We have an opportunity as a company to use that platform to tackle those subjects. If we don’t do it, there is no-one breaking down those walls.”

Shayne’s fiancée Sophie Austin took to her Instagram on Monday night to praise the actor for winning the award.

Alongside a snap of Shayne on the red carpet, Sophie wrote: “Well done bubba for winning best exit at the Inside Soap Awards and for also looking damn fine.”

It comes after Shayne admitted he was disappointed at not being nominated for a National Television Award in the prestigious 2019 awards for Aidan’s’ storyline last week.

While he admitted that it is always an honour to be nominated for any award, he confessed on Twitter that he has been “really hurt” to be overlooked.

He wrote: “It’s always a blessing to be put forward for a nomination. And I’m always humbled.

“But to have not even been considered for Best Serial Drama Performance for Aidan’s suicide has really hurt me.”

Shayne later apologised for his tweet following some backlash, saying: “I’m sorry if my tweet was misconstrued by some. It really wasn’t about me winning an award and being selfish or having an ego. That ain’t me.

“I really thought it was an important issue that I wanted to draw attention to again. Sometimes the way we word stuff doesn’t always showcase our true meaning. So I’m sorry again. Love to you all.”

What did you think of Shayne’s new hair and beard? Leave us a comment on our Facebook page @EntertainmentDailyFix and let us know what you think.