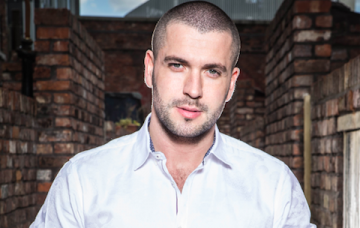 Shayne Ward appeared on This Morning earlier today to talk to presenters Holly Willoughby and Phillip Schofield about Aidan’s exit from Coronation Street.

It was revealing last night that the character is to take his own life next week – and tragic storyline that Shayne has known about since the end of last year.

“I got told before Christmas and I was full of different emotions. I was instantly scared, I was nervous and completely heartbroken as well.

“I knew this was more than just a storyline, I knew the impact that it was going to have on the public when it is aired and I think it’s amazing that Coronation Street is covering this.”

Shayne also revealed that there were clues to where Aidan’s storyline was heading over the last few months: “It’s something that has been underlying with Aidan as we have been going along. There is never one moment where you think something deeper is going on.

“The viewers would have seen it, but the characters in Corrie haven’t seen the little moments. That is the message we’re trying to get out, that it’s not always as plain to see. You have to look a little bit deeper, but all the signs were there with Aidan.”

Referring to a scene in next Monday’s double bill where Aidan gives his dad Johnny a golf club membership as a gift, Shayne revealed that this was his character’s version of a suicide note.

“That was another discussion I had with Kate (Oates, Coronation Street boss) because we didn’t know how to approach the suicide note thing. A lot of people don’t leave them, some people do,”

“He was putting his suicide note into practice by giving his dad a golf membership, he made sure everyone got their jobs back at the factory, he gave little Liam his expensive watch. It was the little things. He was building so many relationships with people so they could see he was a nice guy, a good guy.”

Shayne also expressed how he hopes his character’s plight might help other men going through a similar experience speak out: “Aidan didn’t talk to anyone, and that is the scary thing about it.”

Now that we know the shocking scenes are coming up in Coronation Street next week, fans can brace themselves for the tragic episodes. But the show has made very clear that no element of Aidan’s death will be shown.

Shayne has revealed that he has watched his exit episode and found it very emotional: “It airs in the second episode on Monday 7th May – that is my last episode, and viewers will see all the times Aidan could have told someone but he just felt like he couldn’t.

“I watched the episodes yesterday and that was a very tough watch. The scenes that I do are very distressing, but watching the aftermath of it is interesting because not everyone is going to have the same opinion.

“It was cleverly done and not in your face – it is subtle and cleverly links in with Jack (P Shepherd, who plays David Platt). It makes David realise he doesn’t want to die and spurs him to speak out about his rape. It is a very important message.”

With his time at Corrie now at an end, Shayne hinted that not only would be be spending more time at home with his baby daughter Willow, who he shares with actress fiancée Sophie Austin, but that this isn’t the last time we’ll see him on our screens… “I’m going to carry on acting, especially in dramas.”