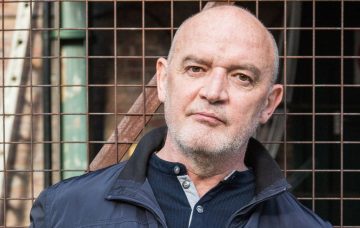 Corrie’s Phelan set to sweep up at British Soap Awards

In the running for four awards...

The character played by Connor McIntyre, who shocked viewers by surviving being pushed off a cliff by his wife, Eileen Grimshaw (Sue Cleaver), has brought a reign of terror to Weatherfield.

The builder has been at the heart of many of the soap’s darkest moments over the past year.

He imprisoned and eventually killed Andy Carver. He was also behind the dramatic murder of Luke Britton who threatened to expose Phelan’s dastardly deeds.

McIntyre has been rewarded with nominations for Best Actor and Best Male Dramatic Performance at this year’s British Soap Awards. Phelan’s reign of terror is up for Best Storyline and the character has also been listed for Villain of the Year.

McIntyre is up against fellow Corrie star Jack P Shepherd, who plays the troubled David Platt.

They will compete for the prize alongside Emmerdale’s Emma Atkins (Charity Dingle) and Hollyoaks’ Anna Passey (Sienna Blake).

Emmerdale will try to retain the title of Best British Soap when it goes up against Coronation Street, Doctors, EastEnders and Hollyoaks.

This year marks the 20th edition of the British Soap Awards which will be screened live for the first time on ITV.

Viewers will vote for their favourite soap moment from the past 20 years to celebrate the anniversary.

The one-off category called Greatest Moment features Coronation Street’ Richard Hillman driving his family into a canal in 2003 and EastEnders’ famous “You ain’t my mother” scene from 2001.

The winners of Best British Soap, Best Actor and Best Actress will be also be decided by viewers.

A panel of industry experts will judge the remaining categories.

The British Soap Awards will be held at The Hackney Empire in London in June.

The ceremony will be presented by This Morning host Phillip Schofield.