Lucy Fallon is enjoying a holiday in New York City with her boyfriend Tom Leech.

The Coronation Street actress has taken to Instagram over the past week to keep fans updated on her American journey.

On Sunday, the star posted a snap of herself sitting on Brooklyn Bridge as she enjoyed the scenery.

She captioned the post: "Don’t want this vacay to end. New York... I love you."

In another photo, Lucy - who plays Bethany Platt on the soap - laughed as she posed in front of the city's iconic Flatiron Building.

Her boyfriend Tom also shared a cute photo to his Instagram, showing the couple posing in front of a helicopter as they prepared to fly around the city. 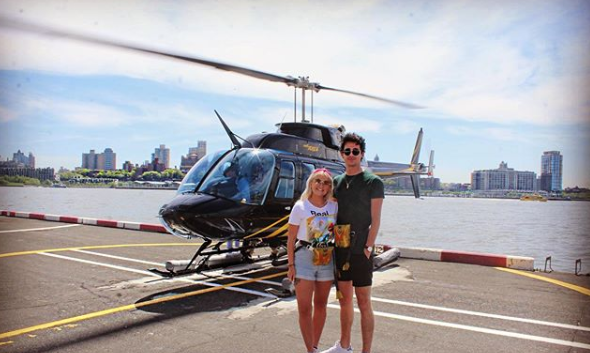 The couple soaked up the sights of New York in a helicopter (Credit: Instagram)

Lucy's holiday across the pond comes after she announced she's leaving Corrie.

The actress became the seventh Coronation Street star this year to reveal they have quit the cobbles.

In a statement posted on Twitter, Lucy told fans: "After the most incredible four years, I have made the extremely difficult decision to leave Coronation Street at the end of my contract in 2020.

"It's hard to put into words how much this show means to me."

She continued: "I've made lifelong friends with some of the most talented and hardworking people in the industry, I've had some terrific and immensely important storylines and I've laughed with the best people everyday."

She concluded: "I'm so thankful to Iain and everyone at Coronation Street, I owe everything to them and I will miss them greatly.

"Thank you so much for your support and love... Can't wait to see what's in store for Bethany this year."

Just to clarify, my decision to leave was made in August last year and has nothing to do with ANYONE at Coronation Street. I didn’t make it lightly and I am going to miss every single person there. Excited for my final year at the best place! Woo💘✨

She later tweeted another message to her 125,000 followers, denying her departure was related to internal conflict at the soap, saying: "Just to clarify, my decision to leave was made in August last year and has nothing to do with ANYONE at Coronation Street.

"I didn't make it lightly and I am going to miss every single person there. Excited for my final year at the best place! Woo."

Will you miss Lucy Fallon's portrayal of Bethany Platt? Leave us a comment on our Facebook page @EntertainmentDailyFix and let us know what you think!