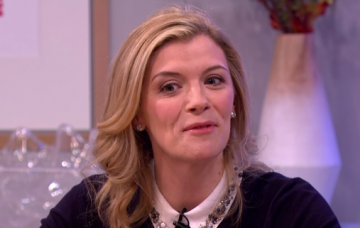 The couple met 19 years ago today!

Corrie’s Jane Danson is obviously in a nostalgic mood, as she’s shared an adorable snap of herself and her husband on the day they met.

The soap beauty is married to former Emmerdale and Brookside actor Robert Beck, whom she first clapped eyes on 19 years ago to this day at the soap awards.

19 years ago today was the very first @SoapAwards and i met the love of my life… and they said it wouldnt last- ha! Love you @RobertBeck529 😘 pic.twitter.com/B6S1p4dIE4

Referring to Robert as the love of her life, Jane also commented that people had said the romance wouldn’t last – the couple have well and truly proved the doubters wrong!

Met the @RealJaneDanson wife 19 years ago today .. in this early photo, she’s telling me she thinks I’d look much better bald … pic.twitter.com/Onz8p4eDsN

Robert shared his own tribute on social media, joking that he’s lost his head of hair since their first meeting! Still gorgeous, though!

While Jane’s romantic life is happy and stable, the same can’t be said of her Corrie alter-ego, Leanne.

She’s currently single after splitting from husband Nick Tilsley, but fans are convinced that she could be about to unite with her ex, Peter.

His current squeeze Toyah is sitting on a massive secret – their daughter Susie’s secret mum is Eva.

This bombshell is bound to explode and viewers think the betrayal of both Peter and Leanne will bring the former couple together.

Would you like to see Leanne and Peter get back together? Leave us a comment on our Facebook page @EntertainmentDailyFix and let us know what you think!