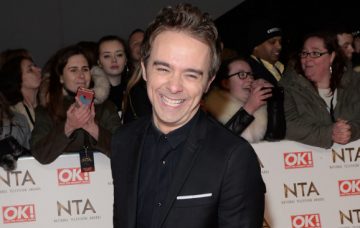 The soap star gushed about his love for Hanni Treweek

If you didn’t know Jack P. Shepherd was majorly loved-up, you do now, as the Coronation Street actor has posted one very gushing post on his Insta Stories.

Posting a Boomerang of him kissing girlfriend Hanni Treweek, Jack captioned the super-cute snap, “Date night I love her. I’m sorry but I do. It’s sickening to most, but I’m crazy about her.”

The smitten actor, 30, also posted a love heart between their heads.

For their romantic date night, Jack has dressed down in a plain white t-shirt, while Hanni is wearing a black lace top, accessorised with hoop earrings.

The pair have been dating since the end of last year, and by the looks of things, they are very much still in the honeymoon phase!

They also enjoyed a romantic break to Rome last month, where Jack shared two holiday snaps of him and Hanni looking very much in love, and in which he described her as a ‘goddess’.

The start of Jack’s relationship with Hanni, who works in publicity, began after Jack’s split with his partner of 16 years, Lauren Shippey.

Jack and Lauren, who have two children – daughter Nyla-Rae, nine, and son Reuben, five – were engaged but have remained on good terms since their split in October.

Jack also has a seven-year-old son Greyson, whom he fathered after a one night stand.

Following his split from Lauren, Jack moved into a new flat with Coronation Street co-star, Colson Smith, who plays Craig Tinker in the soap.

Jack first made his relationship with Hanni Insta-official after just a month of dating in November, when he shared a picture of him and Hanni on a night out together.

Are you a fan of Jack P. Shepherd and Corrie? Leave us a comment on our Facebook page @EntertainmentDailyFix and let us know what you think!