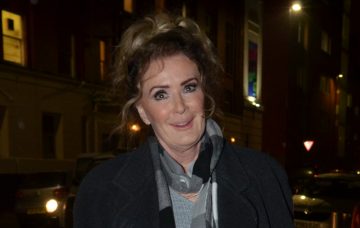 Although she may be taking a break

The actress is taking to the stage this year, with two exciting roles – but that doesn’t mean she’s ready to walk away from the cobbles just yet.

She tweeted on Sunday: “No, I’m not leaving @itvcorrie I love playing Liz.

The actress appeared on Lorraine on Friday to talk about her upcoming stage roles, claiming she had to beg Corrie’s producers to let her have time off the show.

“As an actor you get offered scripts all the time,” she said. “But because I’m contracted to Coronation Street, which I love, it’s very difficult to, even if you love a script, it’s hard to say ‘yes.’

“Everything has to be juggled. This script came to me and I said to my producer at Coronation Street ‘I can’t say no to this, please let me do this.'”

But some appear to have taken Bev’s words as an indication that she was leaving the show entirely – which she appears to have no intention of doing.

She confirmed that she still loves her job on the soap, and the fan response to Liz.

“Liz is so loved so I appreciated that greatly, “she said. “I just love it.”

But she will be taking some time away, to take to the stage as an 80s pop icon in The Thunder Girls.

The Thunder Girls tells the story of an 80s girl group that split when the lead singer decided to focus on a solo career. 30 years later she tries to convince the band to get back together.

The play is based on a forthcoming novel and will have its preview performance at The Lowry in Salford in September.

Bev is also stepping into the national tour of the Rocky Horror Show—playing the narrator in the show’s Liverpool run from the end of April.

She has already played the role a few times, joining the show for its Manchester run in January.

Bev has been playing Liz McDonald since 1989.

Will you be seeing Bev on stage this year? Leave us a comment on our Facebook page @EntertainmentDailyFix and let us know what you think of this story.