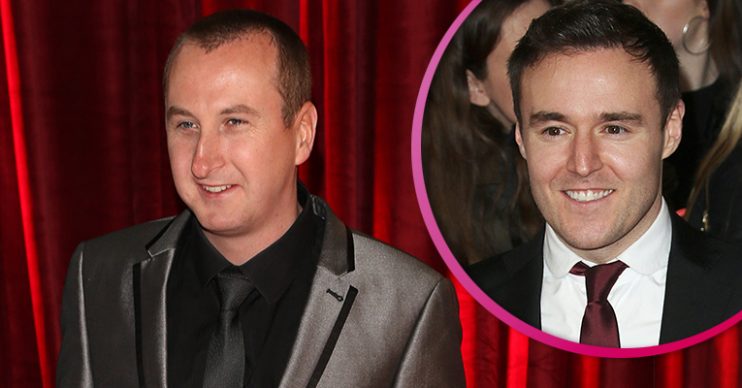 They are close friends both on and off the cobbles

Andy Whymont has kicked off his pal and co-star Alan Halsall’s birthday by posting a hilarious snap on his Instagram.

The pic shows the pair in fancy dress as toy soldiers – green paint and all.

And he captioned the funny pic with: “Love this picture @alanhalsall a massive Happy Birthday mate have a top day, love you loads buddy.”

Many of Andy’s followers shared their appreciation for the pic with comments.

One wrote: “Brilliant mate, you both look ace.”

Another said they resembled the toy soldiers on Pixar’s Toy Story: “Toy story,” while a third joked: “You look like two incredible hulks there!”

And a fourth wrote: “Ha ha ha! This photo has already made Sunday!!!”

My brother from another mother…. I’m lucky to have 2 older brothers in my life who I love … here’s 1 of em @andywhy36

Andy and Alan, who play Kirk Sutherland and Tyrone Dobbs on Coronation Street respectively, are close friends in real life.

And Alan, who will be celebrating his 37th birthday, has much to celebrate.

The Corrie star, who has been playing Tyrone since 1998, is in a new relationship with former Corrie actress Tisha Merry.

And he’s currently on a luxury Greek holiday with Tisha and his young daughter Sienna-Rae.

Alan had his five-year-old daughter with his ex-wife and Coronation Street co-star Lucy-Jo Hudson.

Did you get a chuckle out of Alan’s post? Tell us what you think on our Facebook page @EntertainmentDailyFix.