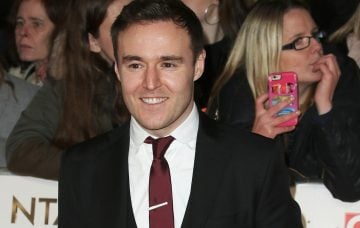 Fans think they would make a great couple!

Coronation Street star Alan Halsall has caused speculation that he may be dating Tisha Merry after he posted a picture of them at the rugby together.

It comes after the actor split with his ex-wife Lucy-Jo Hudson in May last year.

Alan, 39, and Tisha, 25, were all smiles in the photo as he stood with his arm around her. They had gone along to watch the Salford Red Devils play a match at the AJ Bell stadium.

After Alan shared the photo, many of his followers voiced their excitement and told him what a good-looking pair he and Tisha made.

Another added: “You make a lovely couple.”

And a third gushed: “Please say you two are a couple,” while a fourth wrote: “Aw you make a very gorgeous couple.”

But it’s not the first time Alan and Tisha have got people talking.

Last month, they set tongues wagging when they enjoyed a badminton session together.

In Alan’s Instagram Story, Tisha could be seen laying on the floor and sulking after he beat her in a game.

They worked together for a long time up until last year.

Tisha played Steph Britton on the cobbles for five years. Her character then left the show in 2018, after Pat Phelan killed Steph’s brother Luke.

Alan has played the role of Tyrone Dobbs on the soap since 1998.

The talk of their potential romance comes after Alan, who has five-year-old daughter Sienna-Rae with ex Lucy-Jo, revealed an admirer sent him a potato for Valentine’s day.

Alan shared a picture of the spud, which had the cheesy message “you are a-peel-ing” written on it, on his Instagram Story.

He wrote alongside: “So I’m wondering if anyone is going to come forward and admit they sent me this valentines? (I love it by the way).”

Ent Daily has contacted reps for Alan and Tisha for comment.

Do you think Alan and Tisha would make a nice couple? Leave us a comment on our Facebook page @EntertainmentDailyFix and let us know.