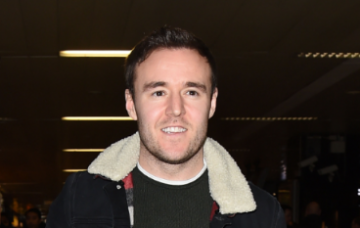 Soap star has separated from Lucy-Jo Hudson, according to reports.

Coronation Street star Alan Halsall has separated from his wife, Lucy-Jo Hudson, who he met on the soap, according to reports.

Alan, who plays mechanic Tyrone Dobbs on the cobbles, is now said to be living apart from his wife of nine years.

“It’s very amicable but they’ve decided to go their separate ways,” a source told The Sun.

“They’re devastated the marriage is over but have vowed to stay friends. They still really care for each other.”

Neither Alan or Lucy-Jo have commented on their relationship via their respective social media accounts – but they have been noticeably absent from one another’s feeds recently.

The last time Alan shared a picture with his wife was Valentine’s Day. Since then, his followers have seen him go on a lads’ holiday to Marbella and shopping for an expensive car.

According to The Sun, friends of Alan, 35, have been joking that he’s having a “midlife crisis”.

In January 2017, he had a hair transplant to tackle his receding hairline. He showed off the before and after results on Twitter in February.

The Sun’s insider said Alan has also joked about having a “midlife crisis” when he attended the opening of a new motorbike showroom in Manchester.

“He was referring to Lucy as his ex-wife and joking about having a mid-life crisis. He seemed in pretty good spirits, though,” the source revealed.

Meanwhile, Lucy-Jo hasn’t mentioned Alan on Instagram for months. The last post she shared featuring him was June 2017.

Since then, her feed has been full of images of her spending time with family, friends and their daughter.

In her most recent post three days ago, she shared an image of their little girl at the playground writing: “Growing up too fast #mybabygirl #truelove#thesimplethingsinlife”

The couple previously split two years ago, but reunited after four months apart.

ED! has contacted Alan and Lucy-Jo’s agents, and representatives from Coronation Street, for comment.